Asked to bat first, RCB managed to recover from a slow start as Kohli and Moeen took the KKR attack to the cleaners in the last ten overs, scoring 143 runs. While Moeen went all guns blazing, taking KKR spinners for a ride, with Kuldeep Yadav conceding as many as 59 runs in his four overs, Kohli, took the matters in his own hands following Moeen’s fall and brought up his fifth IPL hundred.

While KKR did not enjoy a bright start and were reduced to 37/3 at the end of the powerplay, Rana kept them in the hunt even as Robin Uthappa failed to up the ante. However, it was Andre Russell’s introduction in the middle that almost turned the tide of the match as the Jamaican took apart RCB bowling attack. So much so, that KKR, despite needing 23 runs off the final over, were favourites to pull off a heist. However, it was Moeen, who kept his head, even as KKR hit two sixes, as RCB sealed a ten-run win, not letting Kohli and Moeen’s heroics go in vain.

20th over: Kohli can breathe easy and it’s that man Moeen Ali again! What a match he has had! He keeps his head under pressure even as Russell hits one six. KKR have gone past 200 but it is RCB who have sealed the match. Terrific entertainment. KKR 203/5 (Rana 85, Dinesh Karthik 0)

17th over: 15 runs off Siraj’s final over but it’s still below par, keeping in mind the required run-rate. Russell is muscling the ball though. Will KKR pull this off? KKR 153/4 (Rana 60, Russell 41)

14th over: Saini does a wonderful job to concede just seven runs even after giving a four on the second ball. KKR will need to go big. These 7-run kind of overs won’t help. KKR 101/4 (Rana 40, Russell 12)

13th over: Russell and Rana have taken on Chahal as the Indian leg-spinner concedes 13 runs, with Russell hitting a a six and Rana hitting a four. KKR 94/4 (Rana 38, Russell 7)

12th over: End of Uthappa’s struggles. Stoinis has scalped his first wicket of the night. KKR four down in chase as Andre Russell walks in. KKR 81/4 (Rana 33, Russell 0)

11th over: 12 runs from Chahal’s first over as Rana hits two fours. The left-hander could have been run-out though had Chahal collected Parthiv’s throw. Uthappa, though, continues to struggle. KKR 72/3 (Rana 24, Uthappa 9)

9th over: Stoinis is putting KKR under further pressure. He has gone for four in his two overs as Uthappa is struggling to get going. 3 runs off 11 balls is not gonna help KKR’s cause. KKR 46/3 (Uthappa 3, Rana 11)

8th over: Siraj is keeping things tight! Not many easy runs for KKR as the 8th over goes for only five runs. A wicket or a big over is around the corner, something has to give. KKR 44/3 (Rana 10, Uthappa 2)

7th over: Stoinis starts off well here. Just two runs from his first over as KKR look to for quick runs, without losing wickets. KKR 39/3 (Uthappa 2, Rana 5)

5th over: Three down! Steyn has struck for the second time as Gill departs. He has conceded 8 off the over but RCB will not mind that one bit. Kohli, meanwhile, takes a juggling catch but he can’t do much wrong tonight. Right? KKR 33/3 (Uthappa 1, Rana 0)

4th over: 2 runs and a wicket! Saini has given RCB their second breakthrough as Narine’s top edges one and Parthiv takes an easy catch. RCB have dismissed KKR openers early. KKR 25/2 (Gill 2, Uthappa 0)

3rd over: Narine is swinging his bat and the ball is going past the boundary ropes. Thrice in this over. Steyn can’t help but grin. KKR, meanwhile, will be more than happy with this. KKR 23/1 (Narine 18, Gill 0)

2nd over: Four on the first ball but Saini has done well to concede just a run on the next five balls. KKR 11/1 (Narine 6, Gill 0)

1st over: Dream start spoilt but Dale Steyn gets his man on the final ball of the over. Chris Lynn can t make much of his luck as KKR lose first wicket in the chase. KKR 6/1 (Narine 1, Gill 0)

20th over: What a knock! Well done, skipper! Virat Kohli brings up his first hundred of the season before getting out on the final ball of the innings. But RCB have made a remarkable comeback on the back of Kohli’s ton and Moeen’s 66-run blitz. They score 213/4 after 20 overs. What entertainment!

15th over: Fifty up for Virat Kohli and he rides his luck straightway! A top edge flies over the short third-man. RCB will take this and a lot more. Moeen, meanwhile, has hit a four too to move into the 40s. RCB 122/2 (Kohli 55, Moeen 40)

13th over: Narine can consider himself unlucky here as Moeen hits a four off the inside edge. RCB won’t mind this though as they score nine runs off the over to near hundred. RCB 98/2 (Kohli 48, Ali 24)

10th over: Moeen gets going straightway! Kuldeep concedes second six in as many overs as he concedes 10 runs in successive over. RCB 70/2 (Kohli 35, Ali 9)

9th over: 3 runs and a wicket! RCB lose Akshdeep Nath for 13 as Andre Russell strikes in his second over. The West Indian cramps Nath for room and the RCB youngster top-edges the ball and Robin Uthappa catches it before Russell could. RCB 60/2 (Kohli 33, Ali 1)

8th over: Fifty up for RCB! Kohli attacks Kuldeep in his first over, hitting the left-arm chinaman for two fours, as the visitors score from 10 runs from Kuldeep’s first. RCB 57/1 (Kohli 32, Akshdeep 12)

7th over: 5 runs off the over! Kohli and Akshdeep have scored 5 runs off Andre Russell’s first over. RCB three away from their fifty. RCB 47/1 (Kohli 23, Akshdeep 11)

6th over: End of powerplay! Six for Akshdeep and a four, off the edge but nonetheless, for Kohli. RCB have scored 12 runs in the final over of the powerplay. But KKR won’t be too unhappy, barring that waste of a review in the second over, with their showing in the powerplay. RCB 42/1 (Kohli 19, Akshdeep 10)

5th over: Gurney concedes four runs in his second over as RCB are yet to up the ante in the powerplay. They are 30 off 30 balls. Will Akshdeep try and take a few risks in the next over, a final over of the powerplay? RCB 30/1 (Kohli 14, Akshdeep 3)

4th over: Nine runs off his second over but Narine has given KKR their first breakthrough. Parthiv departs for 11 off 11 balls as Nitish Rana completes a catch despite a bit of wobble. RCB 26/1 (Kohli 13, Akshdeep 1)

3rd over: Two fours for Parthiv in the third over of the innings. Prasidh has conceded 10 runs in his first over of the night. RCB 17/0 (Kohli 5, Parthiv 11)

2nd over: KKR have wasted a review. While it was Virat Kohli, who was hit on the pads, the ball was missing the leg-stump by quite some distance. Four runs from Sunil Narine s first over. RCB 7/0 (Kohli 4, Parthiv 2)

1st over: A run each for skipper Virat Kohli and Parthiv Patel and a wide! Watchful start from RCB as the first over, bowled by Harry Gurney, goes for only three runs. RCB 3/0 (Kohli 1, Parthiv 1)

Dinesh Karthik: We’ll bowl first. We’ve been bowling a lot on this wicket and we’ll stick to it. It is a batting friendly wicket and that is what we are looking to exploit that. We have had a break and . Russell is fit and we are playing with the same eleven.

Virat Kohli: We aren’t too bad at setting a target. Last time when we played against KKR we set them a total of 200. This wicket is outstanding, proper cricketing wicket and we’ll look to make the most of it. Every game for us now is like a semi-final or a final, but the most important thing for us is to enjoy ourselves now. AB is not well and we don’t want to risk him. Klaassen comes in for him and Dale Steyn comes back for us after nine long years. His experience and his calm head are going to be very crucial and it could have helped in the earlier games as well.

“Most pace and bounce that you get in the entire country. Expect lots of runs; set for some good new ball bowling and then some big hitting,” says Graeme Smith about the pitch.

Three of their four wins have come while chasing which makes it clear that they don t like batting first. They were flying high on the devastating form of Andre Russell who has played a dominant role in all but one of their wins. Not good defenders, overly dependent on Russell both the factors are hurting them now. 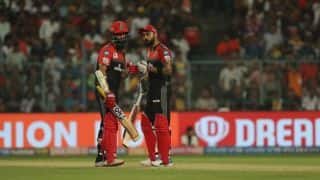