Dhoni, in the penultimate over, denied three singles off three balls even with a batsman of Dwayne Bravo s calibre at the other end.

MS Dhoni played a swashbuckling knock which saw the Chennai Super Kings captain register his highest score in the IPL. Dhoni remained unbeaten in 84 even as CSK lost to RCB by a narrow margin of one run in a last-ball thriller in Bengaluru, resulting in his side s back-to-back defeats in the season.

Dhoni s effectiveness could be estimated from the fact that he lifted CSK from a concerning 28 for 4 and almost got the team home. In the last over, needing 26 to win, Dhoni hammered Umesh Yadav for 24 off the first five balls, but with two needed off the final delivery, Dhoni missed the ball and an alert Parthiv Patel ran Shardul Thakur out as the batsmen scampered for the run.

However, during the chase, Dhoni, in the penultimate over, denied three singles off three balls even with a batsman of Dwayne Bravo s calibre at the other end. Explaining his decision to farm strike, Dhoni explained he backed himself to do the job since he had faced more balls.

“Since I have played so many deliveries, I can afford to take that risk, because a lot of runs were needed. I think 10 or 12 deliveries, we needed some close to 40 runs or 36 runs or something like that, which meant a lot of boundaries were needed,” Dhoni said.

“So yes, right now you can calculate, two runs over there, one run over there, and we are through, because we lost by one run, but at the same time what you have to see is what if there were a few dot balls, whether we could have got those extra boundaries or not.

“It was still difficult at the end. It was slightly spongy (the pitch) and the new batsmen found it difficult. Boundaries were needed and yes we have lost by one run but at the same time we have to see what if there were few dot balls and whether we could have got those extra boundaries or not.”

CSK coach Stephen Fleming too backed Dhoni s decision as he felt the skipper knew best what to do in that situation.

“I think more the reason was that Dhoni felt he was best equipped to hit those sixes. The way he calculates the last few overs based on his power, he would have looked at it saying, ‘I need four-five sixes to win the game’. As it panned out it was pretty close. He’s so calculative, I would never question the last part of an innings with MS,” Fleming said.

“Yes Bravo has power but if MS feels he’s going to win it this way then I’d back him every time. He’s done it so many times and look tonight he got us so close again. So I’d never question that.”

Despite Dhoni s brave call to not rotate strike, CSK s owed their third loss of the season could be to the lack of contribution from the top order. Chasing a below par total as per their skipper, Shane Watson, Faf du Plessis, Suresh Raina and Kedar Jadhav fell for single-digit scores, and it was always going to be tough to come back from such a precarious situation.

“It’s just that batting, once you go in and that’s the time you need to think as an individual what really is needed for the team as of now whether it’s a partnership needed or few big shots,” Dhoni said. “It’s easy to go and play the big shot and even if I get out others will do the job. The problem arises once you play a big shot and you can’t really get out because that puts a lot of pressure on the other batsmen. That’s something we need to calculate.

“That’s why I think the top three can be finishers, they may do it a few times, but when you bat at 5, 6 or 7 whatever you are calculating you have to put a lot of thinking behind it because you lose one more wicket and the game is over at that point of time.” 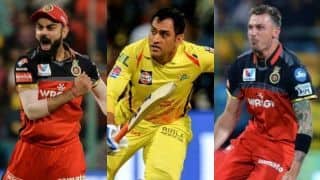