Mumbai Indians are the only team to have a better record against Chennai Super Kings and on Wednesday, the Rohit Sharma-led team extended that lead to 15-12 in all competitions with a terrific come-from-behind performance to register their second win of IPL 2019, and stop the Chennai juggernaut at the Wankhede Stadium, Mumbai. (ALSO READ: Highlights: Mumbai vs Chennai)

The host broadcasters were hell-bent on labelling the match between the two most successful franchises in IPL history as the ‘ÉL Clasico’; so, going by that, Hardik Pandya was most definitely the Lionel Messi. (Scorecard: Mumbai vs Chennai)

His eight-ball blitz off 25 runs in the final two overs of Mumbai’s innings undid Chennai bowlers good work as Mumbai ransacked 45 runs in the last two overs, before sending down a crucial 15th over, that saw the backs of MS Dhoni and Ravindra Jadeja. However, Pandya’s all-round effort overshadowed match-setting innings’ from Suryakumar Yadav (59 off 43 balls) and Krunal Pandya (42 off 32 balls). Chasing 171 to win, Chennai managed 133/8, losing by 37 runs.

After Jason Behrendorff and Lasith Malinga had reduced Chennai to 33/3 – that included unarguably the best catch of the season when Kieron Pollard plucked one out of thin air in front of square to scalp the big fish Suresh Raina for just 16, Dhoni and Kedar Jadhav got Chennai back on track with a 54-run stand – out of which Jadhav scored 42 runs. Dhoni struggled, crawling to 12 off 21, but Dhoni being Dhoni, looked set to take the game deep.

However, Pandya (3/20) banged one short and Dhoni saw the opportunity to charge down and break free, but he popped one to the square leg fielder, Suryakumar. Two balls later, Jadeja was brilliantly caught by Quinton de Kock behind the stumps.

Behrendorff, on Mumbai debut, starred with the ball claiming 2/22 in his four including the wickets of Ambati Rayudu (0) and Raina.

But, Jadhav kept Chennai in the hunt with 58 off 54 balls, the highlight of which was a 15-run over off Bumrah with the duminitive Maharashtrian taking three fours off the World’s No.1 bowler. Yet, with Dwayne Bravo in the middle and Chennai needing 77 off 30, it was anybody’s game. Rohit though had the security of Bumrah and Malinga’s two overs each. Malinga (3/34) rewarded his skipper with the wickets of Jadhav and Bravo (8), while Bumrah came back well to concede just 12 runs in his next three overs.

Earlier, after finding themselves 50/3 in the ninth over, it took a stand of 62 runs between Suryakumar and Krunal to get Mumbai going, but their association came off 49 balls courtesy a tidy spell in the middle overs by Mohit Sharma, Jadeja and Bravo. Hardik and Pollard handed their team the momentum.

Shardul Thakur’s final over – the 19th of the innings – went for 16 runs with one six each from Hardik and Pollard. Bravo, bowling the 20th, was then taken apart with Hardik finishing off the innings with two sixes and four off the last three balls, after Pollard had hit a monstrous six in the over.

Mumbai had a cautious start after being put in to bat as Deepak Chahar started off well conceding just two runs off the over and put de Kock (4) in all sorts of trouble with his swing. Chahar had his man when de Kock, in a attempt to break the shackles, swatted one to square leg fielder Jadhav.

Rohit and Yadav though consolidated well with three fours in Thakur’s second over before adding three more of Chahar’s third. Yadav scored five off those. But the introduction of spin did the trick as Jadeja got a faint edge off Rohit to send back the Mumbai skipper for 13 off 18 balls.

Yuvraj Singh was taken at long-off in the next over off Tahir by Rayudu for four runs. The South African put in a terrific first spell of 3-0-14-1. Krunal and Suryakumar then revived Mumbai with some smart batting. Krunal made 42 off 32 balls with five fours and a six before falling to Mohit in the 17th over.

Yadav looked in top nick through his innings, and upped the up the ante en route to his 6th IPL fifty with a six over deep square, but fell to Bravo in the 18th over after, before Hardik and Pollard blitz swung the momentum in Mumbai’s favour. 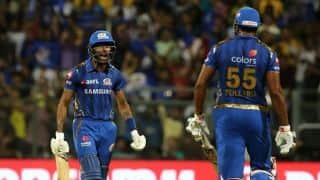