KKR's loss to MI meant that Sunrisers Hyderabad became the fourth team to make it to the IPL 2019 playoffs.

After their pacers – Lasith Malinga, Jasprit Bumrah and Hardik Pandya – restricted Kolkata Knight Riders (KKR) to 133/7, Mumbai Indians (MI) chased down the target with ease to register a nine-wicket win and dashed Dinesh Karthik and Co.’s plans to make it to the playoffs of the Indian Premier League (IPL) 2019 on Sunday.

KKR’s loss to MI meant that Sunrisers Hyderabad, on the basis of better net run-rate, became the fourth team to make it to the IPL 2019 playoffs. MI, meanwhile, moved to the top spot of the points table, which means they and Chennai Super Kings, will face each other in Qualifier 1 and get two chances to make it to the final.

Chasing 134 runs to win, MI enjoyed a bright start as the opening duo of Rohit and Quinton de Kock scored 46 runs in the powerplay. However, the partnership was broken as KKR skipper Karthik took a stunning catch, running towards fine-leg, as Prasidh Krishan gave the visitors their first breakthrough.

While Rohit played a second fiddle till the time de Kock in the middle, he upped the pace and notched up his fifty. Suryakumar Yadav, meanwhile, scored at brisk pace as MI raced past 120-run mark in the 15th over. (IPL 2019, MI vs KKR: AS IT HAPPENED)

Earlier, after put in to bat, KKR enjoyed a decent start as even as Shubman Gill struggled to find his groove. Chris Lynn did a majority of the scoring as the visitors scored 48 runs in the powerplay.

While Krunal Pandya did his bit and did not let Gill-Lynn score too many runs in the powerplay, his brother Hardik gave MI their first two wickets as he sent Gill and Lynn packing shortly after the powerplay.

However, it was Malinga who rattled KKR. The Sri Lankan pacer ran through the KKR middle order, dismissing Dinesh Karthik, Andre Russell and Nitish Rana. With KKR needing nothing but a win to keep alive their playoffs chances, Russell’s contribution with the bat was a key. However, the Jamaican perished for a one-ball duck.

While Robin Uthappa scored 40, he could not find his groove and needed as many as 47 balls to score those many runs. Although Rana scored a quickfire 26 off 13 balls, he did not find any support from the other end as MI restricted KKR to a below-par 133-run total.

While Krunal did not scalp any wickets, he made sure KKR did not get easy runs and returned with the figures of 4-0-14-0. 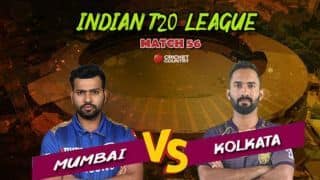