Following their defeat against Mumbai Indians (MI) in the Qualifier 1 of the Indian Premier League (IPL) 2019, Chennai Super Kings (CSK) skipper MS Dhoni admitted that his team’s batting will have to get better.

“Somebody has to lose, things really didn’t go our way, especially batting. At home, we had to assess the conditions quickly, we have played 6 to 7 games on this pitch and should have read the pitch better, that’s the home advantage. We needed to know how the pitch behaves, would it be tacky? Is the ball coming on or not, those were the things we didn’t do well,” said Dhoni after CSK’s defeat at the MA Chidambaram Stadium in Chennai on Tuesday.

“I think the batting needs to get better. These are the best batsmen we have got, it looks like we are batting well, but at times, but in different games, they pull off shots that shouldn’t be played. These are the players who we have banked on, they have the experience and they should know to assess the conditions better, hopefully, we will do well in the next game,” he added. (IPL 2019, Qualifier 1 MI vs CSK: AS IT HAPPENED)

While MI eventually sealed a comprehensive win, CSK had their chances. But while “some balls dropped right in the middle”, at other times the fielder could not hold on to the catching opportunities.

“I think we were a bit unlucky at times, some balls dropped right in the middle, a few catches weren’t taken. We perhaps had to bowl slightly away from the batsmen, could have slowed down the pace and bowl with more variations. But we didn’t have runs on the board, so every boundary conceded in a 130 defence was bad,” said the CSK skipper.

While they may have lost the Qualifier 1, CSK, after finishing in the top two at the end of the league stage, will get another opportunity to make it to the final. But they will have to beat the winner of the Eliminator, which will see Delhi Capitals take on Sunrisers Hyderabad, in Qualifier 2. 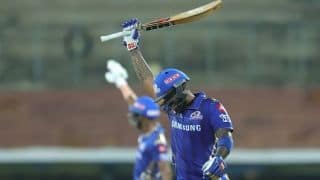