DC weren’t off to a solid start. They had lost their opening pair Shikhar Dhawan and Prithvi Shaw inside the Powerplay overs. Then Ravindra Jadeja took out well-set Colin Munro in the ninth over. 68/3 in 10 overs wasn’t ideal. But they had captain Shreyas Iyer and Rishabh Pant batting together – a duo capable of changing the momentum. Then, MS Dhoni slotted Dwayne Bravo. His first over went quietly barring a four to Iyer. He started making dents from his second over onwards. Change of pace and Axar Patel guided one to third man to hole out 3. That over resulted in a wicket and just two runs. His third over was his most expensive – eight runs – seven singles plus one off a no-ball. He then came to bowl the 18th over – a yorker crashed on the leg-stump of Keemo Paul and the over resulted in just three more runs. Bravo’s spell read: 4-0-19-2.

A mix-up for ages

How much DC will be regretting a comical turn of events that eventually proved decisive. DC didn’t have the security of a big total to defend in Vizag and so they had to make every chance – however, minor – count. They were offered one such in the first over itself. Off the third delivery of CSK chase, Shane Watson tapped to point and set off for a single. Faf du Plessis had also taken few steps and then changed his mind. As did Watson. The duo was stuck in the middle. Meanwhile, Axar Patel threw the ball towards the non-striker’s end where Munro collected the ball and sent it towards the striker’s end. Wicketkeeper Pant failed to collect the ball and CSK duo eventually completed the single after much chaos. DC, probably, were stunned by the easy chance that fell in their lap so early that they failed to make up their mind and eventually it went up in flames.

For the second season in a row, Dad’s Army has again defied the odds. Both Faf and Watson are well into their thirties. Their qualifier clash against DC was touted to be clash of oldies vs young blood. And guess what? Experience triumphed. Following the early reprieve, the CSK openers put their head down and overcame a slow start to lay the foundation of a clinical chase. They made 16 runs in the first four overs. They made 26 in the final two overs of Powerplay. It was courtesy Faf who switched gears with a four and six off successive deliveries from Axar. And then completed a hat-trick of fours against Ishant Sharma in the sixth over. He completed his fifty off 37 deliveries and right after that, Watson swept one for his first six of the night. They added 81 runs before being separated. Watson then went ballistic, smashing three sixes and a four in an over of Paul completing en route to his fifty. He immediately fell afterwards but not before putting CSK well in control of the game. 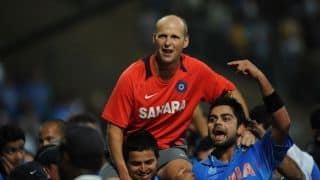