Kohli (67) in company of AB de Villiers (59 not out) scripted a superb run-chase, sharing an 85-run stand to lay the foundation.

Royal Challengers Bangalore (RCB) captain Virat Kohli was fined INR 12 lakh for maintaining a slow over-rate during the match which he and AB de Villiers starred to help RCB to a clinical eight-wicket win over Kings XI Punjab (KXIP) in the Indian Premier League (IPL 2019) on Saturday.

“Royal Challengers Bangalore captain Virat Kohli has been fined after his team maintained a slow over-rate during their VIVO Indian Premier League (IPL) 2019 match against Kings XI Punjab in Mohali on 13th April 2019,” it said in a statement.

“As it was his team’s first offence of the season under the IPL’s Code of Conduct relating to minimum over-rate offences, Mr. Kohli was fined Rs 12 lakh.”

Kohli (67) in company of De Villiers (59 not out) scripted a superb run-chase, sharing an 85-run stand to lay the foundation.

The India skipper blasted eight boundaries, while De Villiers clobbered two sixes and five hits across the rope in his 38-ball innings.

Invited to bat, dashing West Indies opener Chris Gayle (99) carried his bat through with an unbeaten 99, studded with five sixes and as many as 10 hits to the fence to single-handedly anchor Punjab to 173 for four.

Kohli and de Villiers then did bulk of the scoring and once the skipper was dismissed in the 16th over, Marcus Stoinis (28 off 16) played a crucial cameo to take the team through with four balls to spare.

With this victory, RCB also avoided the ignominy of most successive losses for a team at the start of an IPL season. 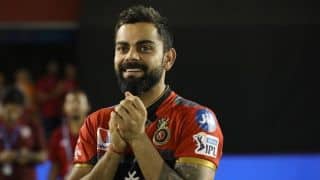