Needing 150 runs to win, DC lost Shikhar Dhawan in the first over after the left-hander got out for a first-ball duck off Tim Southee. RCB would have struck for the second time in the same over but Parthiv spilled a catch as Iyer survived.

DC made full use of that reprieve as Iyer and Prithvi Shaw took on the RCB attack, with the latter hitting as many as four fours in the third over, in addition to four leg-byes to up the scoring rate for the visitors. (FULL POINTS TABLE)

While Shaw perished for 28 off Negi s bowling, Iyer went on to score his first half-century of IPL 2019 before getting out. Although DC had a stutter following Iyer’s dismissal, they managed to secure a four-wicket win with seven balls to spare.

Earlier, after electing to bowl, DC managed to restrict RCB to 149/8 as Rabada scalped four wickets, conceding just 21 runs in his four overs.

Chris Morris struck early as he dismissed Parthiv Patel in the second over to give DC their first breakthrough. In came AB de Villiers. The former South African skipper set the ball rolling with a six on the eight ball he faced.

While he had a lucky escape after DC missed out on a chance to run him put, AB de Villiers could only score 17 as Kagiso Rabada s slower one done him in. Marcus Stoinis was the next man to get out as Axar Patel dismissed the Australian allrounder for 15 in the 11th over to keep RCB in check.

Moeen Ali joined Kohli in the middle and took the attack to the opposition. The left-hander hit three sixes and a fours to race to 32 in 17 balls. However, as RCB were struggling for runs, Moeen ended up playing a shot too many and Sandeep Lamichhane got him out stumped in the 15th over.

While Kohli, who struggled to get strike on consistently, played a couple of big shots off the Nepal legspinner, Rabada struck in the 18th over to dismiss the RCB skipper for 41, and then scalped two more wickets Akshdeep Nath and Pawan Negi in the same over to sink RCB further. 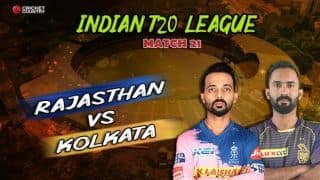 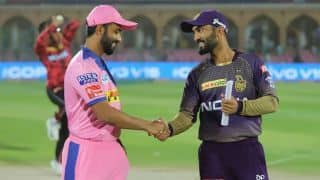