A fuming Bangalore skipper Virat Kohli didn t mince his words commenting on umpire Nandan s mistake of not calling a Lasith Malinga no-ball off the last ball of the match with Bangalore needing seven runs to win off the final delivery against Mumbai at the M Chinnaswamy stadium on Wednesday. (ALSO READ: Jasprit Bumrah steals a humdinger for Mumbai vs Bangalore)

We are playing at the IPL level and not playing club cricket, said Kohli during the post-match interaction. The umpires should have had their eyes open. That is a ridiculous call at the last ball. If it is a game of margins, I don’t know what is happening. They should have been more sharp and careful out there. (Highlights: Bangalore Vs Mumbai – Match 7)

Commenting on the game, Kohli conceded that his team should have restricted Mumbai in the death overs. After being 145/7, Mumbai went on to post 187/8, riding on Hardik Pandya s 14-ball 32-run knock.

When they were 145 for 7, we should have done better, Kohli said, adding, The last few overs were brutal for us. We need to be smarter at death bowling. Sure they guys will take a lot of learnings from the game. I think the way they bowled, we can learn from their game.

Kohli scored 46 before falling to Bumrah while AB de Villiers kept Bangalore in the hunt with a valiant 70 not out off 41 balls, but Bangalore s middle-order faltered.

A few more strikes apart from AB could have done the job for us, pointed out Kohli. The onus is always on each and every member of the team. I got out at a wrong point of time.

After giving away 12 runs in his first over, Bumrah put in an exceptional performance in the death overs to give away just eight runs in his next three overs to hand Mumbai their first win and Kohli was all praise for the Gujarat bowler.

I mean Jassi (Jasprit) is a top-class bowler. A bit of a mistake from me to take him on at that stage. Mumbai is lucky to have him. And also (Lasith) Malinga. And if Jassi is in good form, it is good for India, he added. 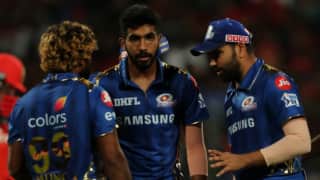