Shreyas Gopal has consistently performed for Rajasthan Royals and has picked eight wickets from as many games so far.

April 2 will always be etched in the memory of legspinner Shreyas Gopal. Playing for Rajasthan Royals (RR) in the Indian Premier League (IPL 2019), he picked three wickets against Royal Challengers Bangalore (RCB) to help his team register a seven-wicket win. More than the win, it were the wickets that he scalped that will stay with him forever Virat Kohli, AB de Villiers and upcoming Windies talent Shimron Hetmyer.

Recalling that day more than two weeks after achieving a feat not many can boast of, Gopal said one cannot have a plan to dismiss legends and can only try his luck.

“There was no plan for them (Kohli and de Villers). You can’t make any plan for such great batsmen. I just wanted to bowl a googly and keep it tight as possible,” he said.

“They misread the line of the ball and I was fortunate to get their wickets.”

In the ongoing edition, the Bengaluru cricketer has consistently performed for his team and has picked eight wickets from as many games so far. But what makes his performance stand out is an economy rate of 6.60.

For a spinner to bowl so well is undoubtedly a quality effort, but Gopal feels there is no secret behind it.

“There is no secret. I am just happy that my hardwork in the past one year is paying off. Despite the kind of result we are getting as a team, personally I had a decent season from the start and will just try to continue and get even better,” he said. (ALSO READ: We are not quite clicking as an eleven and that is costing us: Paddy Upton)

Gopal started his career as a middle-order batsman and slowly turned into a genuine legspinner. When asked how the transformation happened, he said: “It wasn’t something planned. I didn’t bowl much when I was a kid, but in school cricket I had to bowl as sometimes we lacked a good team. So, I just continued to contribute both with the bat and ball. It is always good to have both skills in your armoury as it gives you a chance to contribute to your team.”

The Royals are having a lackluster 2019 season and the legspinner feels his side is failing to perform at critical junctures and that is costing them the entire match.

“Except our game against Kolkata Knight Riders, we could have possibly won all the games as we are just losing few moments in the matches. It is probably the crucial moments which we are not winning, and it is important to win those crucial moments. In most of our games so far, we have dominated throughout the match, but certain key moments cost us the match,” he explained. (ALSO READ: We have 10 games to make a comeback: Yuzvendra Chahal)

Gopal is currently in a team which boasts of star names like Jos Buttler, Steve Smith and Ben Stokes and the allrounder feels their presence is a great asset for the young cricketers.

“They are some of the best cricketers in the world at present. Steve is one of the most destructive batsmen, Buttler is best in limited-overs cricket and Stokes is a natural and a great allrounder,” he said.

“I look to try and understand the type of cricket they play, learn from them and then implement the ideas on the field.” 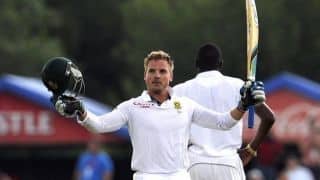