While he hasn't played many matches this year, the best part about the IPL according to Mujeeb is the opportunity to bowl at some of the prospective World Cup opponents.

Injury and poor form made it a forgettable Indian Premier League (IPL 2019) for Afghanistan spinner Mujeeb Ur Rahman but the time away from the field was well spent as he picked on Kings XI Punjab skipper Ravichandran Ashwin‘s brains ahead of the ICC World Cup 2019 in England.

A shoulder injury meant that the 18-year-old wasn’t at his best during the cash-rich league, getting only three wickets in five games with an expensive economy rate of 10.05 runs per over.

“I have learnt a lot having spend quality time with Ravichandran Ashwin in the KXIP set-up. He has given me a lot of useful tips and I am sure that I will execute those plans in the World Cup. During this edition of IPL, my shoulder injury was an issue. But now I am fully fit for the World Cup,” Mujeeb told reporters at a promotional event on Tuesday.

While he hasn’t played many matches this year, the best part about the IPL according to Mujeeb is the opportunity to bowl at some of the prospective World Cup opponents. (ALSO READ: ‘India have got a fantastic chance to lift the ICC World Cup 2019’)

“The IPL schedule is so hectic, and you are travelling a lot. It’s not that you get a lot of chances to talk about the game. But since you get a chance to bowl in matches where there are batsmen who will be there in the World Cup, it helps a lot,” said the Afghan teenager.

Asked if he faced the second season blues, something which was evident as he went for 66 runs in his four overs against Sunrisers Hyderabad, Mujeeb attributed it to being part and parcel of cricket. “You will have a few bad days and it’s just that you have to be consistent with your line and length,” Mujeeb said. (ALSO READ: IPL 2019 team review: Sense of déjà vu for beleaguered Kings XI Punjab)

The youngster is hopeful that along with senior spinners Rashid Khan and Mohammed Nabi, it will be a better World Cup for Afghanistan compared to the 2015 edition where they were making debut.

“Our aim is to at least qualify for the semi-finals. All three of us have different strengths and the main thing that we discuss on-field is to stick to our respective plans. The basic plan is to consistently bowl good areas and hopefully we will be able to do that,” he said. 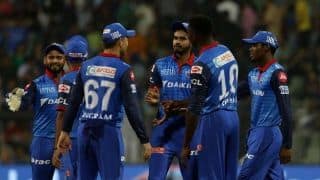 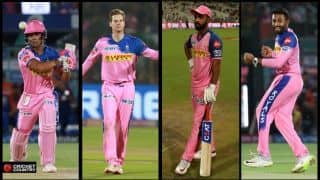