But again only a fool can predict a T20 match - and an IPL final - take the unpredictability to a different zone.

Mumbai Indians will start overwhelming favourites when they face first-time finalists Delhi Capitals in the summit showdown on Tuesday in Dubai. The Rohit Sharma-led side has been near-perfect this season and has the side to successfully defend the IPL title. What makes them favourites is also the fact that they beat the Capitals last week itself by a 57-run margin – but again only a fool can predict a T20 match – and an IPL final – takes the unpredictability factor to a different level altogether.

So here is what makes the defending champions the runaway favourites:

Finale Veterans: Having reached the final on five occasions before tomorrow in Dubai, no other team has the experience of playing the summit clash more than the defending champions. Feeling at home and at ease could make all the difference in Dubai tomorrow. The MI franchise – which has won the IPL title on four occasions – which is the most – makes them the team that handles the nerves better than most. That makes them a clear favourite upfront.

Firing at The Top: The top four of Mumbai has fired on most occasions in the tournament and that has made the difference in many matches. Even without Rohit for a brief period, Kishan stepped it up and did the job. With Suryakumar Yadav and Quinton De Kock in brilliant form, MI’s top four make them frontrunners for the title for the fifth time.

Home of Allrounders: With Kieron Pollard, Hardik Pandya and Krunal, MI easily have the best middle-order and as and when they have been required they have delivered and made a mockery of the opposition bowlers. With the ball and in the field as well the trio is exceptional and that is why Mumbai has been the best over the years. All the three have at some point or the other chipped in and for an opposition side to run through this middle-order is difficult.

The B-Factor: Jasprit Bumrah and Trent Boult have been successful throughout the season. While Boult has consistently got wickets with the new ball, Bumrah has been sensational at the death. Both are assets to have and are world-class. The pace duo has been the best in this season thus far, they have picked 49 wickets, which is the highest by any pair in the tournament. Bumrah is also in the race for the Purple Cap with Capitals’ Kagiso Rabada.

Indian Core Like None: With Rohit Sharma, the Pandya brothers, Jasprit Bumrah, Suryakumar Yadav and Ishan Kishan playing together for some time now. They have the best balance a franchise can dream off and that makes the difference when it comes to dealing with pressure as a team. 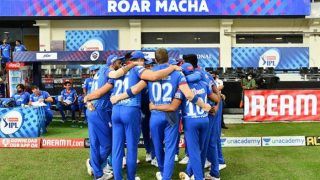