Rajasthan might have made a smart buy with Richardson.

Kane Richardson, the South Australian fast bowler who bowls at decent clicks was one of the surprise buys in Indian Premier League (IPL). He was picked by Rajasthan Royals (RR) for INR 1 crore. It must be an icing on the cake for Richardson, as he celebrated his 22nd birthday on Wednesday. The champagne must have flowed liberally on him.

The swing bowler’s likely inclusion by Rajasthan is arguably due to his uncanny ability to bowl yorkers at will. He gave a glimpse of his burgeoning potential to bowl toe-crushing yorkers in the Big Bash League (BBL) in 2012-13 when he bowled a series of yorkers for Adelaide Strikers against Hobart Hurricanes to leave the opposition in a state of daze. In Australia’s domestic cricket, he is known more as a bowler suited to the abridged version of the game as well. Actually, one is reminded of James Anderson when Richardson propels the ball at a decent burst of pace in the shorter forms of the game.

Last year, he even played for Pune Warriors of India (PWI) who bought him for US$700,000. It couldn’t have been easy playing for an enervated team that lost game after game. But on occasions, he showed flashes of brilliance. Unfortunately,  more often than not struggled to keep the run flow down.

Rajasthan might have made a smart buy with Richardson. Yes, it is surprising to one-and-all that the likes of Clint McKay, Adam Milne, Pat Cummins and Doug Bollinger haven’t been picked. But Rajasthan just might have pulled out another rabbit out of the hat by plumping for the 22-year old swing bowler. 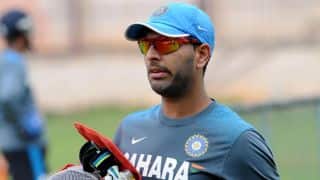