The final leg of the IPL will be held in India from May 13 and June 1 after the elections.

While the Centre is yet to take a call on allowing the second leg of Indian Premier League (IPL) in India in view of the general elections, the Kerala Cricket Association (KCA) has evinced interest in hosting some of the matches at the Jawaharlal Nehru International stadium.

The Board of Control for Cricket in India (BCCI) has chosen the UAE and Bangladesh as overseas venues for the seventh season of the IPL, while the final leg will be held in India between May 13 and June 1 after the elections are over.

KCA President T C Mathew told reporters that he had handed over a letter from the BCCI Secretary to Kochi Police Commissioner, enquiring about the police bandobast which can be provided during the IPL matches.

“Unofficially we discussed with state Home minister, Ramesh Chennithala and police officials and they have responded positively,” he said.

The opinion of the franchisees will also be taken before finalising on Kochi as the venue. The IPL Governing council is meeting in Chennai tomorrow, Mathew said.

In Kerala, the Lok Sabha polls will be over by April 10 and the post-election scenario is also normally peaceful, which could work in the state’s favour.

The stadium has a capacity to accommodate about 75,000 spectators.

Kochi had hosted five IPL matches in 2011 when Kochi Strikers Kerala was one of the teams in the league. 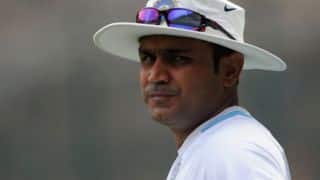