Gautam Gambhir was purchased by Delhi Daredevils in the on going IPL auction 2018 for INR 2.8 crores.

Gautam Gambhir was purchased by Delhi Daredevils in the on going IPL auction 2018 for INR 2.8 crores. Gambhir who initially started his IPL journey by playing for Delhi was the most expensive player in the 2011 edition. Kolkata Knight Riders had purchased him for US $2.4 million.

Gambhir has led the KKR team to two IPL titles in the year 2012 and 2014. Gambhir who has been playing for KKR for the last seven years have expressed his feelings for the franchise thanking them for support but also said he is all set to turn things around for Delhi.

Thanks @kkr for all d support. Will miss Kolkata and Eden. Now, time to try and turn it around for @DelhiDaredevils @IPL. Happy to be back… pic.twitter.com/Wx53ilU9ka

Gambhir scored 172 in nine matches with a high score of 66 in the Syed Mushtaq Ali trophy. He played an important role for Delhi as they lost to Vidarbha in the final. 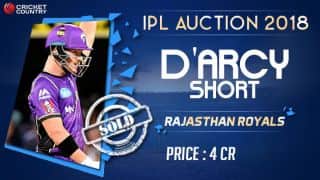