The Mumbai allrounder was purchased by RCB for 25 times his base price.

From a base price of Rs 20 lakh, the young Mumbai allrounder Shivam Dubey made heads turns at the 2019 IPL player auction in Jaipur on Tuesday, going to Royal Challengers Bangalore for 25 times that.

Delhi Capitals and RCB set out for Dubey’s services at a fast pace, before Mumbai Indians entered the bidding at Rs 1.20 crore. Delhi backed out, and Mumbai and RCB chased him until Kings XI Punjab jumped in at Rs 4 crore. RCB held out for the winning bid of Rs 5 crore, making Dubey the costliest uncapped purchase of the auction.

A talented but unfit cricketer was how Dubey was referred to as a young boy. But when that became a hindrance as he aimed to carve a career as a professional cricketer, he worked hard, became fitter and ensured to not do his reputation of a big-hitting left-hander any harm.

At the Mumbai T20 League this year, Dubey skyrocketed into contention when he belted five sixes in an over from Pravin Tambe. In the ongoing Ranji Trophy, he struck 114 off 139 against Railways. He s a pace bowling allrounder that makes him a valuable commodity, especially in Indian cricketing circle. His T20 strike-rate is 147.65 and has picked up 10 wickets in 13 matches.

Two days before the IPL player auction, Dubey served further reminder to the franchise scouts by hitting five sixes an over off left-arm spinner Swapnil Singh on the final day of their Ranji Trophy game versus Baroda. 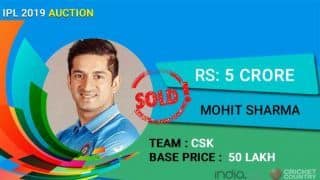