Pooran was previously on the payrolls of Mumbai Indians and has CPL success to his credit.

The young West Indies wicketkeeper-batsman Nicholas Pooran has earned a contract worth Rs 4.20 crore by Kings XI Punjab, who staved off massive interest from Royal Challengers Bangalore to secure the 23-year-old for nearly six times his base price.

Pooran, who has played six T20Is, joined fellow West Indians Carlos Brathwaite (Rs 5 crore) and Shimron Hetmyer (Rs 4.20 crore) as the most successful overseas players to be snapped up in the first hour of the 2019 IPL player auction in Jaipur on Tuesday.

Pooran was previously on the payrolls of Mumbai Indians and has success in the Caribbean Premier League to his credit. 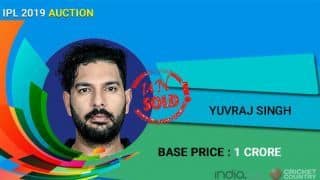