His base price was set at Rs 20 lakh, meaning he went to KXIP for 42 times that amount.

In what could turn out to be the story of the year, Tamil Nadu’s Varun Chakravarthy has fetched a whopping price tag of Rs. 8.4 crore  at the 2019 IPL player auction in Jaipur on Tuesday to match the valuation of Jaydev Unadkat who has returned to Rajasthan Royals earlier in the rounds.

The uncapped domestic spin bowler, who made headlines during the Tamil Nadu Premier League this year, won a bonanza payday from Kings XI Punjab who followed the purchases of Mohammed Shami and Nicholas Pooran for Rs 4.2 crore each by forking out Rs 8.4 crore for the rookie.

Chakravarthy’s base price was set at Rs 20 lakh, meaning he went to KXIP for 42 times that amount. This is the third highest any IPL franchise has paid for an uncapped Indian cricketer, after the Rs 8.8 Krunal Pandya and Rs 8.5 Pawan Negi pocketed.

Delhi Capitals and Chennai Super Kings led the bidding for him until the Rs 3.60 crore mark, at which stage KXIP jumped in. CSK backed out, but Capitals did not give in so easily. At Rs 7 crore, two-time IPL winners Kolkata Knight Riders joined the bidding and upped the stakes to Rs 8.20 but could not stop KXIP from acquiring their target.

His comeback to cricket is an interesting story on its own. After giving up professional cricket for a career in architecture, Chakravarthy couldn’t stay away for long from his first love despite enduring “several failures” in his own words. He was a fast bowler, lied that he could keep wickets and eventually made name as a mystery spinner.

After sessions with IPL giants of the likes of Chennai Super Kings, Kolkata Knight Riders and Mumbai Indians, he was the talk of the town during the TNPL where he impressed with his ability to plug the flow of runs, delivering 125 dot balls (he bowled 40 overs). Then in the Vijay Hazare Trophy, he finished with 22 wickets from nine matches – the second-highest of the one-day tournament after Shahbaz Nadeem. 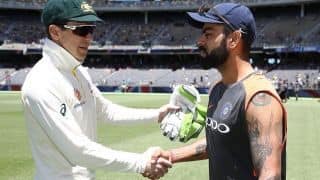