Earlier CSK had also announced that ticket proceeds of their IPL 2019 opener against RCB will go towards the families of the victims of the Pulwama terror attack.

In the wake of the Pulwama terror attacks and keeping in mind the sentiments of the people, the Supreme Court appointed Committee of Administrators (CoA), administering the BCCI, has decided to cancel the opening ceremony of the Indian Premier League (IPL) and donate the money budgeted for it to the armed forces.

“The estimated cost of hosting an IPL opening ceremony is Rs 20 crore. It was unanimously decided that a sum of Rs 11 crore be contributed to the Indian Army, Rs 7 crore to the CRPF and Rs 1 crore each to the Navy and Air Force respectively,” the board said in a statement on Saturday. (ALSO READ: KXIP donate Rs 25 lakh to families of five CRPF soldiers martyred in Pulwama attack)

Throwing light on the matter, CoA Chairman, Vinod Rai said: “As a federation, we felt it was best not to hold a regular IPL opening ceremony. Instead, we decided to contribute the amount towards a cause that is so important and close to everyone’s heart.” (ALSO READ: Proud of CoA s decision to donate IPL opening ceremony s money to Pulwama martyrs’ families: CK Khanna)

Diana Edulji, another member of the CoA, said: “This comes as a welcome move and as a mark of respect to the ones who lost their lives in the terror attack. The BCCI has always been sensitive towards issues of national interest and will continue to make contributions whenever the need arises.”

Earlier on Wednesday, Chennai Super Kings‘ (CSK) team director Rakesh Singh had also announced that ticket proceeds of their IPL 2019 opener against Royal Challengers Bangalore will go towards the families of the victims of the Pulwama terror attack. 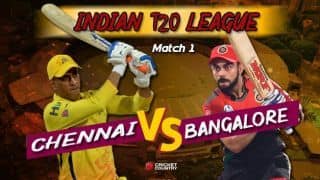