Vidarbha piled on 800/7 in the first innings which they declared on the fourth day on Saturday.

Ranji Trophy winners Vidarbha grabbed their second title in the domestic cricket season as they won the Irani Cup thanks to their huge first innings total against Rest of India here on Sunday.

Vidarbha piled on 800/7 in the first innings which they declared on the fourth day on Saturday. RoI then on the fifth and final day were bowled out for 390 in their first innings.

The western outfit then reached 79/0 before the match was declared a draw, giving Vidarbha their maiden Irani Cup title.

The match was almost dead when Vidarbha registered the huge total, thanks to veteran Wasim Jaffer (286), Apoorv Wankhade (157 not out) and Ganesh Satish (120).

On Saturday, Vidarbha had reduced RoI to 236 for six wickets in their first innings, thanks to medium pacer Rajneesh Gurbani’s four wickets.

Hanuma Vihari and Jayant Yadav, who had joined hands when RoI were reeling at 98/6, extended their overnight unbeaten 138-run stand to 216 runs.

While Vihari added 102 runs to his overnight score of 81, Jayant was dimissed for 96, adding 34 runs on Sunday.

It was Hyderabad right-hander Vihari’s 14th century in first-class cricket.

Left-arm spinner Aditya Sarwate claimed the wickets of Vihari, Jayant and Shahbaz Nadeem (15) as Karun Nair-captained RoI were bowled out for 390, falling short of Vidarbha’s first-innings total by 410 runs.

Vidarbha decided to bat in the second innings and reached 79/0, with openers Akshay Wadkar (50 not out) and R. Sanjay (27 not out), extending RoI’s misery before the match was declared a draw. 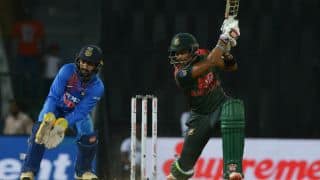