Stuart Binny’s whirlwind ton and Karun Nair’s stable fifty have helped Karnataka surge past Rest of India (ROI) in the Irani Cup game at Bangalore. Binny scored at a rapid rate and got to his ton off only 82 balls. Meanwhile, ROI are searching for the breakthrough as they have been severely dented by the assault. Karnataka are on 357 for four with a lead of 156 runs.

The evening session began with Nair already past fifty, continuing with stability. All he had to do was work the strike over and allow Binny to take control. Even when the new ball was taken, Binny continued to attack. He pulled Anureet Singh high over the fine-leg boundary. Once the ball was retrieved, Harbhajan wasn’t happy with its condition, but the umpires continued.

Binny kept playing expansive strokes and was helped by ROI at times. Harbhajan shied at the stumps on one occasion and it hit the woodwork and went for four, taking Binny to 97. Later, he got to the mark by working Pankaj through fine-leg for a brace.

At this juncture, Karnataka have steamed ahead and ROI are far behind. They will need some effort to get back. 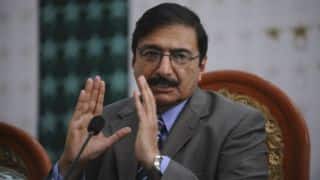