Ireland on Thursday announced the 14-man squad for the upcoming one-off ODI against visitors West Indies on September 13.

Ireland announced the 14-man squad for the upcoming one-off One-Day International (ODI) against West Indies at the Civil Service Cricket Club in Stormont, Belfast on September 13. This will also be Ireland s first international tie since they got Test status in June. Fast bowlers Barry McCarthy and Craig Young miss out owing to respective injuries. However, Ireland have been boosted by the return of Paul Stirling and Niall O Brien. John Bracewell, Ireland head coach, expressed his disappointment as the top duo of Ireland s pace bowling attack missed out. However, he also expressed his confidence in the current bowling attack, which has the aura to restrict the West Indian batsmen. FULL CRICKET SCORECARD: Ireland vs West Indies 2017, one-off ODI at Belfast

As reported by Cricbuzz, Bracewell informed: Barry fractured his thumb batting in the nets and is expected to be out of action for around three or four weeks. Craig s recuperation from an ongoing elbow problem is continuing but if surgery is required, which it may be, this could put him out for eight to ten weeks. We should know that for certain very shortly. On the plus side we have Paul Stirling and Niall O Brien back from injury and that will certainly bolster the batting. George Dockrell has been in prolific form in domestic cricket and he is recalled too, which means we have no fewer than six spinning options in the squad. Sorensen announces retirement from international cricket

The West Indies showed incredible character to bounce back after losing the opening Test heavily against England, and showed just how dangerous and talented a side they truly are. It ll be a great occasion for players and fans alike, and one that everybody is really looking forward to. It s sure to be a carnival of colour at Stormont. John Bracewell to step down as Ireland coach in December 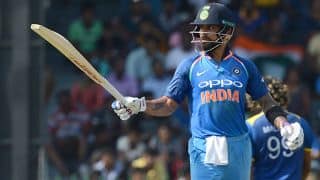