A blistering half-century from Hazratullah Zazai saw Afghanistan beat Ireland by 16 runs in a rain-affected first T20I of the three-match series at Bready Cricket Club on Monday.

A blistering half-century from Hazratullah Zazai saw Afghanistan beat Ireland by 16 runs in a rain-affected first T20I of the three-match series at Bready Cricket Club on Monday.

The contest was reduced to 18-overs-a-side and opener Zazai gave the visitors a flying start as they posted 160/7. In reply, Ireland kept losing wickets regularly to finish at 144/9 as the visitors took a 1-0 lead.

Zazai, playing in his first international match for the first time in over two years, celebrated his comeback with a 33-ball 74.

The 20-year-old struck eight fours and six sixes during his entertaining knock before spinner Simi Singh ended his assault in the eighth over. Simi then effected a run out to get rid of Mohammad Shahzad on 29. However, their innings soon ran out of gas.

At 150/2 in 15 overs, Afghanistan were set to tee off. However, left-arm pacer Joshua Little struck twice in the space of three deliveries to rein them in. Tyron Kane, who was expensive in his first three overs, leaking 44 runs, also struck twice in his final over as Afghanistan managed 10 runs in their final three overs apart from losing five wickets.

Mujeeb Ur Rahman (2/14) then struck in his first two overs to get give Ireland early blows in Stuart Thompson (5) and William Porterfield (8). Opener Paul Striling looked good for his 19-ball 27 before a stunning one-handed catch near the boundary from Aftab Alam sent him back.

Captain Gary Wilson top-scored for Ireland with 34 off 23 and the lower order pair of George Dockrell (22) and Simi (20) tried making a contest out of it but Aftab (2/30) and Rashid Khan (3/35) ensured there was no late drama. 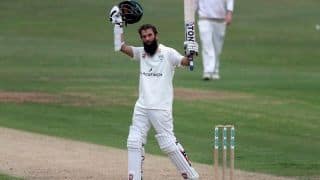 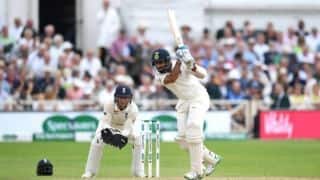