England will look to get a win after a horrendous World Cup.

England travel to Ireland for what will be their only engagement in their stay in the island, a solitary One-Day International (ODI). England arrive at the shores of Ireland following what can be politely termed as an average tour of the West Indies, and the ODI will give them the practice before the start of the important series against New Zealand. James Taylor believes he will lead a new era of England cricketers against Ireland in one-off ODI

The squad for both teams were announced recently. England will be without some of their key players like James Anderson, Stuart Broad and Joe Root as they have been rested after their tour of West Indies.  England will be therefore be led by young James Taylor.Ravi Bopara and their regular skipper Eoin Morgan will not be participating as they are currently in India, playing in the Indian Premier League (IPL) 2015. It will be an opportunity for the skipper as well as the selectors to test the bench strength, especially the likes of Mark Wood, Lewis Gregory, James Vince, etc, who are unknown quantities in international cricket.  VIDEO: James Taylor looking ahead to lead England against Ireland in one-off ODI at Malahide

Ireland will however e without Tim Murtagh once again as he sustained a hamstring injury while playing  for Middlesex in England. Murtagh also missed the ICC Cricket World Cup 2015 due to an injury, just days before the mega event. Hosts Ireland will be playing their first international matches since their match against Pakistan in ICC Cricket World Cup 2015, which they lost by seven wickets. James Taylor to lead England against Ireland

It was a decent outing for the Irish, who nearly qualified for the quarter-final stage. After getting off to a brilliant start with a four-wicket win against West Indies in their tournament opener, they pulled off narrow victories against United Arab Emirates (UAE) and Zimbabwe to finish with three wins out of six. The team will draw inspiration from their World Cup exploits when they face their neighbours. The cheer of the local crowd should serve as a bigger inspiration for the likes of Kevin O’Brien and Gary Wilson, who were among the most successful batsmen for the side in the recent mega-event. VIDEO: England vs Ireland 2015, one-off ODI at Malahide: Rob Key speaks on Sam Billings

The venue, called The Village in Malahide, Dublin, has played host to four ODIs till date. Interestingly, all four games have seen the chasing team win, something that both captains will bear in mind when they walk out for the toss. 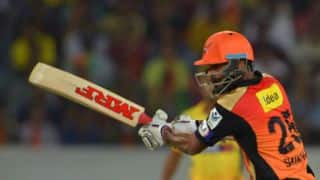