Porterfield was bowled and O'Brien was out LBW to Tauqir.

William Porterfield and Niall O’Brien both fell to the UAE skipper Mohammad Tauqir in the 16th match of ICC Cricket World Cup 2015 between Ireland and UAE at Brisbane. Porterfield tried to go for a slog sweep but was bowled in the process. Soon O’Brien tried sweep as well, but was hit on the pads instead. He was adjudged out LBW by the umpire, but he went for a review. Replays upheld the umpire’s call as Ireland lost their fourth wicket. Live Scorecard: Ireland vs United Arab Emirates (UAE) ICC Cricket World Cup 2015

Ed Joyce was not able to make the most of a bizarre let-off. Joyce was caught behind by Swapnil Patil off the bowling of Javed. Joyce had earlier survived a bizarre dismissal after getting “bowled” by Amjad Javed. The ball swung late and hit the off stump, but to the shock of the UAE fielders, the bails were not dislodged. Though the LED lights on the stumps and bails lit up, the bails themselves stayed in place. The rules of the game say that a batsman cannot be given out bowled (or run out/ stumped for that matter) unless the bails are dislodged from the stumps. Live Updates: Ireland vs UAE ICC Cricket World Cup 2015 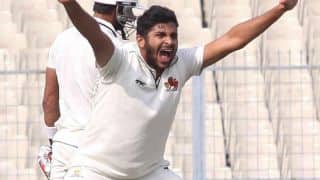