Comeback man Irfan Pathan is delighted that all the pain and hardwork that he has gone through in the last two years finally paid off as he has been recalled to the Indian ODI squad for the last two matches against the West Indies. Comeback man Irfan Pathan is delighted that all the pain and hardwork that he has gone through in the last two years finally paid off as he has been recalled to the Indian ODI squad for the last two matches against the West Indies.

“It would be difficult for me to say whether it’s more of happiness or a relief that I am back but I would like to make full use of the opportunities available. Not many people get a chance to represent the country and I have been fortunate enough to do that and, God willing, would like to represent my nation for a long time,” Pathan told PTI over phone from Vadodara.

The left-arm seamer, who was out in the wilderness for the last two years, due to a sharp dip in form and subsequent injuries thanked former MRF coach TA Sekhar for his support.

“TA Sekhar’s inputs have proved to be beneficial for a lot of pacers across the country and I am one of them who has immensely benefitted from his technical inputs. He discussed a few corrective measures regarding my wrist position which has helped me get my swing back. The hard work is certainly paying off,” the talented Pathan Junior stated.

Was it the seven-wicket haul against Delhi that helped him clinch a berth, Irfan answered, “I can’t say that on the basis of one performance I am back. I have started this season really well and has been consistent so far. I am feeling well and the rhythm is back. Now I have to carry on the good work to the next level.”

Proper rehabilitation has always been a problem with Indian players and Irfan admitted that his rehab program was brilliantly chalked out by the National Cricket Academy.

“I always wanted to make a comeback when I am more than 100 percent fit. I didn’t want to rush my comeback. My stint at the NCA was really helpful. Thanks to BCCI, for sending me abroad, for my injury treatment.”

His family, especially elder brother Yusuf and his sister, has been a pillar strength during his comeback trail.

“Yusuf and my sister have always been encouraging. But I am indebted to all my fans who have supported me throughout this lean phase. I was amazed to see that they never lost faith in my abilities and always felt that I would be playing for India again,” the all-rounder said in an emotional tone.

Asked whether the pressure of expectations took a toll, he replied, “I don’t want to dwell on the past. I want to remain positive and look ahead.”(PTI) 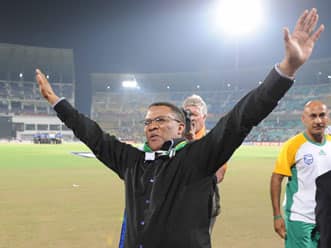