After launch of Cricket Academy of Pathans (CAP) in Raipur, Port Blair and Lunawada, Irfan Pathan and Yusuf Pathan inaugurated their fourth academy.

Surat: After the successful launch of the Cricket Academy of Pathans (CAP) in Raipur, Port Blair and Lunawada, the cricketer duo of Irfan Pathan and Yusuf Pathan on Saturday inaugurated their fourth cricket academy. Partnering with PitchVision cricket technology, the Pathan brothers plan to get the best cricketing expertise from across the world to their second academy in Gujarat. The core team at the Cricket Academy of Pathans is made up of cricketing greats like former India coach Greg Chappell and Cameron Tradell along with Yusuf and Irfan. PitchVision’s state of the art cricket coaching technology will enable the Pathan brothers and their team of experts to monitor and track the overall progress of their cricketers on a day-to-day basis. Irfan, Yusuf launch Cricket Academy of Pathan (CAP)

“Technology is revolutionising the game of cricket. We are happy that we found an apt partner in PitchVision’s cricket coaching technology which will help us groom the upcoming cricketing talent,” Irfan said at the launch. “The technological assistance provided by the Pitchvision system, coaches and kids will be able to understand and analyse their game in a better manner. This technology will also help me and Yusuf to monitor the progress of each cricketer,” he added. Irfan Pathan: Greg Chappell had no hand in promoting me more as an all-rounder

The Pathan brothers Irfan and Yusuf earlier launched Cricket Academy of Pathan (CAP), their fourth academy to provide quality coaching and contribute in the development of the sport in the country. The Pathan brothers plan to lunch CAP in 5 more cities in India in the next couple of months and also intends to have around 20 academies across the country by 2017, reported PTI. 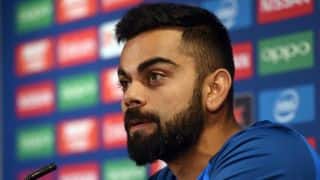 ICC Champions Trophy 2017: No problems with Anil Kumble, asserts Virat Kohli ahead of clash vs Pakistan