New Zealand could not find the finishing lines in India and as a result slipped down from the coveted No.1 T20I spot after losing the third T20I at Thiruvananthapuram. New Zealand’s start to 2018 could not have been better. With a 3-0 T20I whitewash over world champions West Indies, New Zealand have reclaimed the top spot. It does not end here, Colin Munro and Ish Sodhi too have climbed to No.1 spots for batsmen and bowlers respectively.

New Zealand marched to the pinnacle following a stellar show at Mount Maunganui on Wednesday. Munro finished as the leading run-getter in the T20I series with 223 runs at a strike-rate of over 197. In the final game, he slammed 53-ball 104, becoming the only batsman to score 3 T20I hundreds. Sodhi grabbed three wickets, including 2 for 25 in the final T20I.

Munro has leapfrogged teammates Kane Williamson (7th position) and Martin Guptill (11th position) to reach the No.1 spot in T20I Rankings with 793 points. Aaron Finch is in the second spot with 784 points, followed by Virat Kohli at 776.

Sodhi too was at the 10th spot and leaped to the No.1 Ranking. He earned 70 points in the series to reach 726 points. He is ahead of Pakistan’s Imad Wasim (719 points) and Afghan teen sensation Rashid Khan (717 points). Fellow spinner Mitchell Santner is at the fifth spot.

ICC’s media release states, “Munro is the third New Zealand batsman to surge to the top of the T20I batting table after Brendon McCullum and Guptill, while Sodhi is the third Black Caps bowler to rise to the top after Daniel Vettori and Shane Bond.

It s a bit of a surprise but one that I think anybody would take. It s been a bit of a goal of mine to get up the rankings and to get to the top is pretty special. Yeh great to get the treble. It s pretty weird actually and it s testament to the way we ve prepared.

Ish has been bowling wonderfully in T20 cricket and the team has been going from strength to strength and it s testament to the way we ve been preparing for series and I think we re getting better and better every time, Munro told ICC.

‘Hasn’t sunk in yet’

For Sodhi, the success hasn’t sunk in yet.

A delighted Sodhi commented: I m really grateful for the success I ve had and I m stoked to be ranked number-one. It hasn t really sunk in just yet, but I m sure it will as the days progress.

I ve been trying to find a really good balance between attacking and defending, and I think it s getting better and better the more I play.

I played club cricket with Colin when I was about 15-years-old and he handed me my first premier cricket cap. So, I m stoked to see him doing what he is doing at the highest level.

We ve been a really good T20I side for quite some time now and I think it s probably down to how we adapt to conditions and also our leadership – the boys have been really good at helping us young players.

New Zealand have a tougher challenge coming their way. They will face Pakistan in a ODI and T20I series, starting January 6. 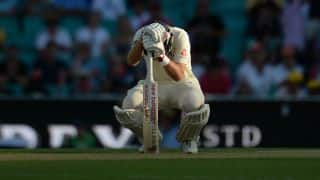