Ishant Sharma dismissed Hamish Rutherford to get to the mark.

Ishant Sharma has taken his 150th Test wicket during the first Test between India and New Zealand at Auckland. Ishant dismissed Hamish Rutherford for six in the 10th over after the Indians won the toss and put the hosts in to bat.

Ishant has taken 54 Tests to achieve the mark, a high number for a frontline fast bowler. After Zaheer Khan, he is currently India’s most experienced fast bowler.

Rutherford poked at one outside the off-stump and the ball flew to Ajinkya Rahane, who dived across to his right to take a magnificent catch. This is a good start for India and Ishant. 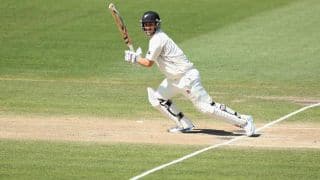