It is quite ironic that India beat England on a green track at Lord’s. But, given the fact that England dominated India on turning pitches in India in 2012, this should come as some payback for the tourists. In a Test match that has seen an ebb and flow of momentum, with neither side able to seize the initiative, India emerged stronger on Day Five with Ishant Sharma‘s remarkable spell to bowl England out for 223 in their run-chase of 319.

On Day One, England won the toss and chose to bowl first on a green surface at Lord’s. The surface had a lot of movement and help in it for the fast bowlers. Though India had determined cameos from Cheteshwar Pujara and Murali Vijay, they still slipped to 145 for seven. That was when Ajinkya Rahane constructed a wonderful century, to help India get back into the game, and took India to 295. It was an innings of incredible balance and one that fought the conditions and the bowlers.

A 24-run lead was slender and the onus was on both sides to press the issue. Murali Vijay led India’s challenge. There were a few moments when England looked like they were getting back in the game. Liam Plunkett took Cheteshwar Pujara and Virat Kohli off consecutive deliveries. Then, Rahane got a bad decision and had to walk back. At the end of Day Three, India were four down and were only 145 runs ahead.

The next day, England came back by taking MS Dhoni and Stuart Binny in quick succession. But, that was when Ravindra Jadeja came in and chaged the course of the game. He smashed a combative 68 to take India beyond the 300-run lead. Bhuvneshwar also contributed with another fifty. India were ultimately bowled out for 342. England needed 319.

When it came down to the lats day, England were bolstered by a spirited stand by Moeen Ali and Joe Root. They put up a century stand and Root got to his fifty. The chances kept coming, but India couldn’t covert them. And, as lunch approached, England looked good at 173 for four. But, that was when the Ishant burst began. He first bounced out Moeen off the last ball of the session. The ball climbed on Moeen and he could merely fend it, to be taken by short-leg.

After lunch, India changed their tactics, getting their fast bowlers to bowl a barrage of short deliveries. Ishant initially went for plenty. As many as 20 were scored off two overs. But, Dhoni persisted with the tactic and placed men back. Ishant came from round the wicket and continued with the barrage. Matt Prior fell to that ploy as he pulled one straight to mid-wicket. A few overs later, Ben Stokes got his third consecutive duck in this series when he pulled Ishant across the line and was caught at mid-wicket. And, Root, who had looked very good while playing the short ones, found the man perfectly at deep square-leg.

India’s victory at Lord’s comes after 28 years. The last time they won was back in 1986. This victory was achieved when James Anderson was run-out. 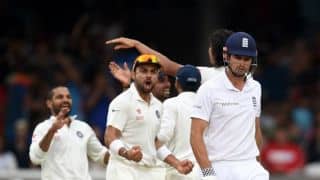 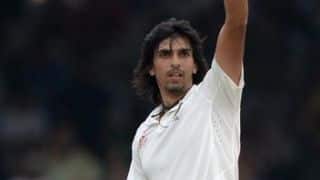