Bengal pacer Ashok Dinda recently was struck on his forehead while attempting a difficult caught-and-bowled chance during a practice T20 match at Eden Gardens.

Bengal pacer Ashok Dinda recently was struck on his forehead while attempting a difficult caught-and-bowled chance during a practice T20 match at Eden Gardens.

After the batsman Vivek Singh struck one straight, Dinda went for the catch in his follow through only for the ball to pop out of his hands and hit him flush on the forehead.

Fortunately, subsequent scans didn’t show any damage, but it did lead to conversations surrounding the safety of bowlers who more often than not are in the firing line.

Saurashtra captain and strike bowler Jaydev Unadkat called for the introduction of face masks while India offspinner Ravichandran Ashwin touched upon the increased frequency of such incidents.

Dinda, 34, himself feels that the officials have to think seriously regarding the safeguard measures to ensure a bowler doesn’t end up getting severely injured.

Cricket is evolving and the bowlers also need some protection. It will be good if we can have face masks or something similar, Dinda told The Telegraph.

Dinda felt the reason batsmen tend to be more aggressive in shorter formats these days necessitates such steps. It could be because of the T20 effect No doubt that the batsmen are more aggressive in T20s and that has crept into other formats as well. By the grace of god, nothing much happened (following the injury). But it s always good to be safe rather than being sorry, he said.

The International Cricket Council (ICC) has introduced strict measurers regarding the safety of batsmen following the tragic death of Australia batsman Phillip Hughes who was struck by a bouncer during Sheffield Shield tournament. 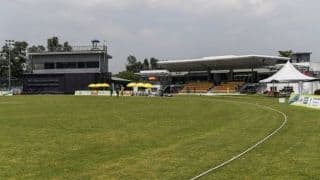