Andrew Hudson, the Proteas selection panel chief, has hinted that Jacques Kallis’s days as an international cricketer are numbered.

Andrew Hudson, the convenor of South Africa’s national selection committee, has hinted that Jacques Kallis’s days as an international cricketer are numbered. Speaking to DNA shortly after the third ODI in Centurion on Wednesday, the former opener said “there could be some changes in the Test team in the near future” and that “Kallis would be the catalyst of those changes”.

“It is good to know that we can beat India in our own conditions. But I think our preparation is important given that we are building a team for the 2015 World Cup in Australia,” Hudson said.

When asked him if Kallis was part of his plans. “Yes,” replied the 48-year-old who played 35 Tests and 89 ODIs between 1991 and 1998. But his subsequent comments suggested otherwise.

A veteran of 164 Tests and 325 ODIs, Kallis has over 24,000 international runs. Not to forget his 550-plus scalps and 300-plus catches. Considered by many as the greatest cricketer of all time — second, perhaps, only to Sir Garfield Sobers — he has been struggling to assert himself. After a self-imposed exile from One-Day Internationals (ODIs), he was back for the series against India but did nothing of note in the first two games, and was promptly rested in Centurion.

Remember Kallis has 44 Test hundreds and is just seven short of Sachin Tendulkar’s mountain of 51. So will the selectors persist with him till he goes past the Indian?

“I think, at the end of the day, it’s up to Jacques. Tendulkar had an intention to play as much as he did. And I think we will have a discussion with Jacques as to how long he intends to play. We are very cognizant of the fact that he has been a great servant of South African cricket.

“But ultimately, it’s about how long he wants to play and how many records he wants to break. He has the class, just like Sachin does, or had. And he can play on for as long as he wants. If he’s motivated, we will accommodate him,” Hudson said.

He added, “There are going to be some changes in the Test side in the near term. One of those changes is Jacques. We have got some nice support bowlers and batters coming up. In terms of changes, Jacques will be the catalyst. We could have someone else batting at No. 4. He won’t be coming down the order. Whenever he does retire, we won’t play seven batters. At No. 7 we will have to play an all-rounder.”

So will the two-match series against India be Kallis’s last? Or will the selectors hold on to him till they host Australia in early 2014. To quote a local journalist, “Jacques has said on record that he would love to play his last Test in Mumbai or Kanpur. Apparently, he loves the atmosphere in these cities.” That would require Haroon Lorgat to request N Srinivasan to hastily arrange a series in India later this year. And chances of that are unlikely. 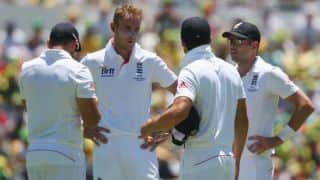