Jacques Kallis has been termed as one of the greatest all-rounders in modern day cricket.

Kallis, speaking to the Times of India, opened up about many issues including his retirement and on cricket in general and also talked about South Africa’s chances against Australia in their upcoming series.

When asked about completing a remarkable career in international cricket, Kallis replied, “I was amazed how quickly the years went by. I really enjoyed my Test career. I feel proud of my achievements and that I was able to assist South Africa in becoming the No. 1 Test-playing team in the world.”

“Playing Tests really takes it out of you, both physically and mentally. The ODI setup is a different sort of pressure. I want to go out and express myself now on the field. Retiring from Tests gives me that freedom. Everything I do now is to improve my skills in the one-day format,” added Kallis on his decision to retire from only Test and not limited-overs cricket.

On South Africa’s chances against Australia without him playing in the upcoming series, Kallis opined, “I think it will be a tough series for both teams. It is difficult to answer the question. I hope that South Africa do really well without me and beat the Aussies.”

When queried about his experience of playing cricket in India, Kallis said, “India is a fascinating place to tour. The conditions are very different to anywhere else in the world. The passion of the people is amazing. They just love the game and their players. I really feel that the Indian team feeds off the energy of the people. That’s why their record is so good at home.”

Kallis who also had something to say about on the ‘Jacques Kallis Scholarship Foundation’ added, “The game of cricket has been good to me. I have met amazing people both on and off the field. When I was awarded a benefit year in 2005 I decided that I wanted to give back something to the game and my country. I, therefore, used the money I raised in the year to start the JK Scholarship Foundation. It’s main objective is to fund underprivileged young people in South Africa through what we call Model C schools in South Africa. We wanted to firstly give them a proper education and secondly try and provide as best as possible cricket coaching. It has given me great pleasure in seeing young boys arrive and grow into grown men when they leave. Some have progressed from a cricketing point of view and others have been given a chance because of the education in a world that is cut-throat.”

When asked about which aspect of the game he enjoyed the most, Kallis said, “I enjoy batting the most.”

Kallis when queried on his opinion on talent and hard work in cricket said “Difficult question. I don’t think you can get to the top with no talent. But you do have to put in the long hours as well. It is possibly a combo of the two.”

On questions of the most troublesome bowler he had ever faced in his career, Kallis replied, “Difficult question again as you play on so many surfaces. A spinner would trouble you on a turning wicket and a seamer on a green top. Probably Shane Warne on a turning track and Wasim Akram on a seaming wicket.”

Kallis who also is known for his intensity on the cricket field added about the mental aspect of the game by saying, “I always prepare well mentally. It is something I taught myself and then it became a habit over time.”

When asked about being connected with the sport even after his retirement, Kallis said, “Definitely in some way.”

On him receiving praise as the ‘greatest all-rounder’ to have ever played cricket in the modern era Kallis replied,”Very happy to be included in a list of great allrounders.”

When queried about the helpfulness of Twenty 20 cricket in the modern day game, Kallis said, “I think so. It has helped improve the skills of players, especially batsmen.”

On the final question of the difference between a great player and an ordinary one, Kallis signed off by saying, “Mental toughness and technique.” New Zealand on verge of moving up in ICC Test rankings 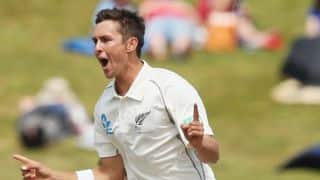