James Laver and his romance with the bats

James Laver and his romance with the bats

The science behind the making of a cricket bat.

Waipawa: Few cricket fans have heard of James Laver, even though the master craftsman’s bats — likened to “Stradivarius in willow” — have graced the innings of legends such as Sachin Tendulkar, Brian Lara and Ricky Ponting. Laver works in relative anonymity in the hamlet of Waipawa on New Zealand‘s North Island, hand-carving bats for his boutique Laver & Wood label while also supplying some of the world’s top players. But elite batsmen inevitably have lucrative endorsement contracts with major manufacturers, so the bats he makes for the stars appear with the sponsor’s name on, rather than Laver’s. New Zealand fanatic globetrotting for glimpse of final at Melbourne

Laver explained he has an understanding with major manufacturers that he can talk about retired players who have used his blades, but not those who are still playing. The result is polite evasiveness when trying to determine the level of Laver’s involvement in Sunday’s ICC Cricket World Cup 2015 final between New Zealand and Australia. Can he confirm his bats will be used in the decider at the Melbourne Cricket Ground?: “Yes” Can he say who will be using them?: “No,” he replies with a twinkle in his eye. “But they’ll be on both sides. People often ask if I get frustrated that my name’s not on there but it’s not like that. I know my bats will be used in a World Cup final regardless, and that’s quite cool, in a way.” ICC World Cup 2015: Dhoni calls for changes in ODI playing conditions

Every bat is different

Drifts of wood shavings reach knee high in the corners of Lavers’ factory, where bats of every kind line walls and shelves — from rough-hewn “clefts” of imported English willow, to split, battle-scarred blades sent by clients around the world to be replaced. After one half-formed bat has gone through a mechanical press — two tonnes of pressure to compress the wood and harden the face — Laver administers a quick “thwack, thwack, thwack” with a mallet. MS Dhoni: Don’t make a big deal out of Virat Kohli’s dismissal

“You’re listening to the bat, every bat has a different pitch,” he says. “A close grain might have one sound if it’s a good bat, but if it’s not so good it’ll be different. Also, you’re getting a feel for how well the blade bounces and what it’s going to do.” Laver originally trained as a construction engineer in his native England but wound up serving an apprenticeship with batmakers Millichamp & Hall. After marrying a Kiwi, the 44-year-old moved to New Zealand and set up Laver & Wood in 1999, keeping alive century-old practices that have disappeared elsewhere in the face of mass production.

“We’re the only company worldwide now that would make a bat through the all phases from the cleft to the finished product in whatever shape you want it,” he said. Each bat is handmade after customers provide details such as height, batting style, favourite shot, most common dismissal method, type of wicket played on. The factory produces about 1,800 bats a year, compared to 700 a day from major manufacturers, with prices ranging from NZ$400-1,000 ($305-760). Laver said about 60 percent of his customers were Indian, mostly expatriates, who were looking for a bat that was individually tailored to improve performance and also carried exclusive cachet. Sachin Tendulkar congratulates Australia for reaching World Cup final

Each bat takes about four hours of labour and goes through a week-long process of curing, shaping, sanding and polishing. One of the bats being worked this week was a four pound (1.8 kg) monster. Laver says there is no doubt blades are getting bigger and he believes administrators will eventually have to impose limits. He said a huge bat was not always needed for powerful hitting, citing Sri Lanka‘s Sanath Jayasuriya, who used Laver’s products through most of his career. “He hit a lot of sixes but didn’t use a really heavy bat, it was only 2lb 7oz (1.105kg),” he said. “It was all about aggressive attitude and style of play.”

“They all use different specs, for instance, Brian Lara was a very light bat, standard length but short handled because he wanted good bat speed but power too.” As for Tendulkar: “He has a super-short handle but with a longer blade, even though he’s not particularly tall. That style is copied now by a lot of Indian players.” Laver said he initially struggled in such a niche market but he gradually expanded through innovative techniques such as online marketing, so much so that he took on an apprentice three years ago. “There were moments when you asked yourself ‘is it worth it, will I make it through the year?’ But I love making bats and the reputation has slowly grown to a point where we’re more comfortable now. It was a great year last year and the World Cup’s been flat out.”, he said.  MS Dhoni laughs off retirement suggestions 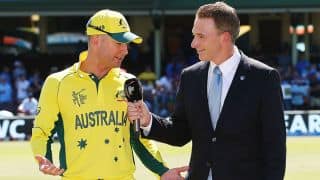