If Gillespie takes up the job, he would become the first Australian to coach England's men's team in their 138-year history.

London: Former Australia pacer Jason Gillespie is reportedly poised to accept the vacant post of England coach after the sacking of Peter Moores.

“The new coach will be given the opportunity to do his job – he won’t be a whipping boy for me,” England and Wales Cricket Board’s (ECB) director of cricket Andrew Strauss was quoted as saying by cricket.com.au on Friday. Reports in England and Australia suggest Gillespie is set to take over the job on Tuesday. He met Strauss on Thursday, which fuelled the rumours.

Strauss earlier said the board “won’t rush” to any decision having had three different coaches at the helm over the past 16 months. If Gillespie does take up the job, he would become the first Australian to coach England in the national men’s team’s 138-year history. The new coach would be installed in the midst of England’s current two-Test and six limited-overs internationals series against New Zealand and six weeks prior to the opening Ashes Test against Australia, beginning in Cardiff on July 8.

Reports suggest Gillespie had been “persuaded by Strauss to take the job” during Thursday’s meeting in which Gillespie’s misgivings about the level of autonomy afforded to the new coach were addressed. It was earlier reported that the former quick was concerned when Strauss, at his maiden media conference as director, unilaterally ruled out any imminent return for outspoken batsman Kevin Pietersen and installed Joe Root as Test vice-captain and Eoin Morgan as the One-Day International (ODI) and T20 skipper.

Gillespie earlier this week confirmed that he “would certainly take persuading” to leave English county side Yorkshire where he guided his team from Division Two of the England County Championships to the Division One title last summer. 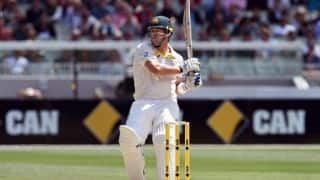