Pothas thought his bowlers did a decent job.

West Indies fielding coach Nic Pothas hinted that injured skipper Jason Holder may have nicked his ankle during the team’s pre-season training camp in Dubai in the third week of September.

“I am not in a position to discuss Jason’s injury, but he felt something in Dubai in our pre-season camp,” Pothas said at the end of Day 1 of the first Test between India and West Indies at Rajkot on Thursday.

“Obviously, it has not settled down as much as he or the medical staff would like. He will be monitored on daily basis, and we will wait and see how that pans out.”

Besides, Holder, West Indies’ bowling attack missed Kemar Roach, who had to leave the pre-season camp following the death of his grandmother. With only Shannon Gabriel, who was played 37 Tests, being the only experienced fast bowler among Keemo Paul, who has played one Test, and debutant Sherman Lewis, forming the pace attack, West Indies struggled to land the ball in the right areas.

Pothas thought his bowlers did a decent job. “It is a game of chess,” he said.

“You do not want the game to run away from you early in a Test match. I thought [stand-in captain] Kraigg [Brathwaite] did fantastically well today. I think I have also learnt having played against India a lot, Virat [Kohli] would do something pretty similar. It is tough conditions, and what you do not want is to have a day that goes in excess of 400 or 420 because you keep fielders in attacking positions for too long. We had discussed this, very happy with how Kraigg has gone about the day. The bowlers stuck to the job very well.”

He was particularly pleased with Gabriel’s efforts. “Shannon has had a fantastic year,” he said.

“Through the series against Bangladesh and Sri Lanka, he bowled quick. We know that Shannon Gabriel can bowl quick, but the most exciting part for me was at the back end of the day he was still getting it up to 145 kilometres an hour, [at the] end of a very hot day on a pretty docile wicket. The other thing is Shannon’s attitude has been unbelievable, where we have had a pretty young bowling attack and he has stood up as a senior player, bowled his overs, and he has helped those young guys through what is a pretty tough day against some very good batters.

“You got one guy (Lewis) who is making his debut and one guy (Paul) who is playing his second Test match, so hats off to Shannon, I thought he was fantastic today.” 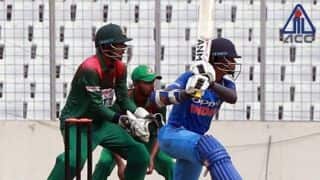 U19 Asia Cup: India make it to the final with two-run win over Bangladesh