Contributing to India s domination were Pujara with 86 in a second-wicket partnership of 206 with Shaw, and Kohli with 72 not out.

Prithvi Shaw, the youngest specialist Indian batsman to be handed a Test debut since Sachin Tendulkar in 1989, looked utterly at ease in his first innings at international level as his 134 off 154 balls laid the foundation for a total of 364/4 on day one of the first Test against West Indies at Rajkot.

Contributing to India s domination were Cheteshwar Pujara with 86 in a second-wicket partnership of 206 with Shaw, and Virat Kohli with an unbeaten 72 as a threadbare West Indies attack – already without Kemar Roach, they lost skipper Jason Holder before the toss – was punished on a very good batting track.

Until – three minutes before tea – he fell against the run of play with a tame return catch to Devendra Bishoo, Shaw looked impregnable from the time he got off the mark with a pleasing drive into the covers for three. All but two of his 19 fours were controlled, easy-on-the-eye shots coated with the confidence of a teenaged batsman earmarked for success at the highest level and as he marched to a century in 99 balls to become, at 18 years and 329 days, the youngest Test debut centurion for India, it all seemed rather inevitable.

The absence of West Indies two most-capped bowlers was stark, with only Shannon Gabriel really posing a problem. Keemo Paul, one Test old, conceded 41 runs in 10 overs. Sherman Lewis, the debutant, struggled to locate his radar and went for 4.66 per over. Bishoo managed one maiden over out of 30, without finding any noticeable turn. His career on a downward spiral over the past couple of series, Roston Chase was hit for 51 runs in his first 10 overs. All this worked wonderfully well for India s batsmen, barring KL Rahul.

Taking strike for the first ball of the Test, Shaw looked on as Rahul was given lbw for 0 in the first over from Gabriel, but did not appear rattled at the slightest. His first boundary was a cracking slap past point of Paul. In Paul s second over, Shaw unfurled three boundaries: a stunning flick off the pads, a glance to fine leg and a slash over the slips. Each shot had the Tendulkar stamp, and in no time Shaw was 22 off 16 balls.

His fifty came up off his 56th ball faced, a straight drive off Chase being received by loving cheer from the few spectators gathered at the venue – most of them school children. In Chase s next over, Shaw put away a half-tracker and a floated up delivery to the extra cover boundary in succession, and with growing disdain.

Shaw cracked two fours off Bishoo in the over after lunch to move to 84, moved into the nineties by smacking a Bishoo long hop, spanked Gabriel wide of point to get to 98 and then drove a full ball from Paul into the covers and scampered back for two to get to a cherished hundred off 99 balls. Shaw s celebration was one of relief, and you got the sense that plenty more was ahead.

As tea approached, Shaw fell to a straightforward caught-and-bowled for Bishoo. This cut off a very pretty innings of immense maturity and application, and left India at 232/3 in the 51st over.

That Shaw had a batsman of Pujara s experience at the other and was no doubt a big help. India s No 3 was also the beneficiary of some inconsistent bowling at a venue where he has racked up over 1000 first-class runs at an average of over 68, including a career-best 302 not out. Lewis was punched past the stumps twice with sumptuous timing and then cracked off the back foot, before Bishoo strayed onto the pads and was paddled for four more. Pujara followed Shaw to his own fifty off 67 balls, and looked on course for a century of his own before he poked at Lewis and nicked behind.

Kohli and Ajinkya Rahane (41) put on 105 in more circumspect manner, their stand broken not long before stumps when the latter edged a gleeful Chase to Shane Dowrich. With Rishabh Pant new to the crease and Ravindra Jadeja to follow, India can hope to pile on the misery on the second morning. 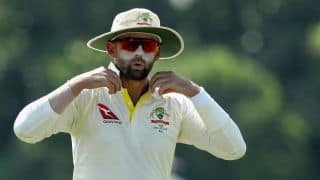