Javed Miandad has lashed out at the Pakistan Cricket Board (PCB) for recalling banned trio.

Karachi: Former Pakistan skipper Javed Miandad has lashed out at the Pakistan Cricket Board (PCB) for recalling Mohammad Asif, Salman Butt and Mohammad Aamer to play active cricket, saying that the tainted trio don’t deserve a second chance after being accused of match- fixing. The Dawn quoted Miandad, as saying that the trio should not be allowed to play cricket at any level in spite of serving out their punishment. The batting icon further insisted that Pakistan could earn a spot among world’s top sides if they concentrate on improving their youngsters rather than calling players indulging in criminal activities. Salman Butt urges youngsters to learn from his mistakes in regards to spot-fixing

Earlier, the International Cricket Council (ICC) had confirmed that the sanctions against Mohammad Asif and Salman Butt will expire at midnight on September 1, 2015, and that they will be eligible to return to competitive cricket, at both the domestic and international levels, from September 2, 2015 after fulfilling the specific conditions laid down by the independent Anti-Corruption Tribunal. PCB seeks clarification from ICC over Salman Butt, Mohammad Asif’s return to cricket

Further, it said that Mohammad Amir will be eligible to return to cricket at international level at the same time, following permission being granted to him to return to play domestic cricket in Pakistan earlier this year. The three players were found guilty of various offences of corrupt behavior relating to the Lords Test between England and Pakistan in August 2010 by the independent Anti-Corruption Tribunal on February 5, 2011. Mohammad Asif ready to face fans’ abuse after returning to field 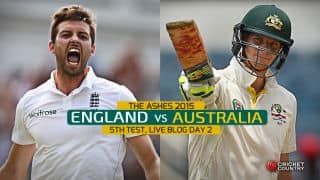