Thomson was adamant it was a later generation of Aussies who took the practice to its height.

London: Australia fast-bowling great Jeff Thomson has said the expected absence of Ryan Harris from the tourists’ attack for the first Test against England in Cardiff next week won’t hamper the team’s Ashes chances. READ: ‘New England’s’ form across formats a good sign

He also played down suggestions that Australia would have the edge over England following a 5-0 Ashes win on home soil in 2013-14, adding that if anyone might have “scarring” it would be the Australians given they had not won a Test series in Britain since 2001.

Harris was left out of Australia’s ongoing final warm-up match against Essex after suffering a recurrence of the knee trouble that has plagued his career, but with Michael Clarke’s men boasting plenty of fast bowling cover, Thomson said Thursday: “I wouldn’t have had him in any way.” READ: Ashes 2015: Four factors indicative of England’s nervousness

Speaking at a press conference in London organised by series sponsors Investec, Thomson said his preferred pace attack out of Australia’s current squad consisted of Mitchell Starc, fellow left-armer Mitchell Johnson — who took 37 wickets at 14 apiece during the last Ashes — and Josh Hazlewood. “I know (people talk about) Johnson, but I think Hazlewood might be a leading wicket-taker here. I love Starc, always have for years. He’d be my first pick.”

Thomson made his name during Australia’s 4-1 Ashes series win in 1974-75 when he formed a celebrated fast-bowling partnership with Dennis Lillee. In five matches that series — he missed the last through injury — Thomson took 33 wickets at under 18 apiece bowling at a ferocious pace that has rarely, if ever, been exceeded. But just a few months later, Australia faced greater resistance in England before winning a four-match series — shorter than normal because of the inaugural 1975 World Cup — 1-0. READ: Ashes 2015: Shane Watson faces tough challenge to maintain position

Asked if fast bowlers caused long-term psychological damage to opposition batsmen, Thomson said: “I don’t think it is psychological. We (Australia) haven’t won here for 14 years. So we’ve got a bit of scar tissue if you want to call it that. Playing here is hard work. It was the damndest thing, the team we flogged in Australia, then we came here and it was really uphill trying to win a match.”

There has been plenty of talk in the build-up to the Ashes about the amount of “sledging”, or verbal abuse of opposition players, that is likely to place given the acrimonious exchanges between the two sides in 2013-14. READ: The Ashes 2015: Have England picked their best squad for first Test vs Australia?

Australia have long been considered “past masters” at “sledging,” starting from Thomson’s heyday in the 1970s, but the 64-year-old was adamant it was a later generation of Aussies who took the practice to its height. “I think it developed more in the 90s with Warnie (Shane Warne), (Ian) Healy and all those guys,” said Thomson, whose prime years as a Test bowler came during the captaincy reigns of Ian and Greg Chappell.

“We didn’t say much. I never said anything to anybody unless somebody said something to me. And nobody’s going to say anything to myself, bowling 100mph,” said Thomson, whose 51 Tests yielded exactly 200 wickets at an average of 28 apiece. “You are not going to say to Viv Richards ‘you can’t bat,’ you are not going to say to me ‘you can’t bowl fast.’ If you do you are going to get a show, you’re better off zipping it,” Thomson subsequently told AFP. READ: Ashes 2015 without sledging will lack flavour

“In the 1990s, when I was doing television commentary, it revved up, we used to hear it through the mics (microphones), Hayden and Healy all those guys, it did get a bit much. It was getting stupid.”

By contrast, the time Thomson was most taken aback by comments on the field came when Colin Cowdrey, summoned at the age of 41 from the depths of an English winter to reinforce a battered and bruised top order, first spoke to him during the 1974-75 Perth Test. “He just said: ‘Mr Thomson, Colin Cowdrey, I’ve been dying to meet you’. I was just shocked,” said Thomson. “But I could see that he could play. He was a fantastic player.” READ: Ashes 2015: Stuart Broad will be key to England’s chances against Australia 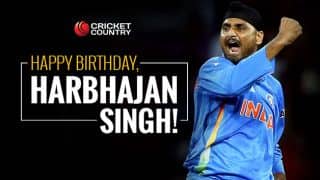