Jesse Ryder: Have done stuff which I shouldn't have

Jesse Ryder: Have done stuff which I shouldn't have

Ryder spent 56 hours in a medically-induced coma after being brutally assaulted outside a Christchurch bar.

Jesse Ryder, the 29-year-old New Zealand all-rounder has recently admitted that he had done some stuffs in past which he should not have done. But he criticised some of the articles related to hime, which were published in media. In an interview to The Guardian Ryder said, “I’m always first to say I’ve done some stuff that I shouldn’t have but some of the stuff that’s been written and said about me is bullshit.”

Ryder spent 56 hours in a medically-induced coma after being brutally assaulted outside a Christchurch bar. After months rehabilitation from his injuries he made an emotional comeback to the New Zealand’s one-day side on Boxing Day last year against West Indies. He also moved from his domestic team Wellington to Otago to rebuild his career. Ryder is currently in England, playing for Essex in the Natwest T20 Blast.

He further added, “It’s quite tough even to want to talk to people about it. After what happened [in Christchurch] I was just like: oh well, let’s flag the past, move on and just enjoy life. Every time someone brings up stuff that happened years ago, I’ve got no time for it any more.” Ryder admitted that the near-death experience in Christchurch has changed his life, he has found a new outlook on his his life.

“I try not to let too much faze me any more,” he says. “I just want to enjoy the game instead of having everyone fuss about it and try to get in your head. Last season moving to Otago was a fresh start after all that stuff and it seemed to work for me. I just went down there and enjoyed myself in a new environment. Coming over here as well has made a pretty big difference, just being able to go about my business and play cricket and enjoy it again instead of worrying about other stuff,” Ryder said.

Ryder also admits he still suffers from the physical effects of that attack. “It took probably six or seven months just to get fit enough to play cricket again. I’m not too sure if I’m 100% head-wise but I’m pretty good physically. There’s just some stuff which is not quite right — I struggle with light-headedness sometimes and forgetfulness. It doesn’t worry me too much. As long as it doesn’t affect my cricket I’m happy.”

New Zealand will co host the cricket World Cup next year. When Ryder was asked about his chances to play in the world cup, he said, “The World Cup will be massive for the country but that’s up to them not me. We’ll see what happens. But to re-sign here would be my first goal. That’d be something exciting. I’m not too sure [About his chances of playing]. I haven’t heard from them. Whichever way it goes it won’t bother me too much.” India A vs Australia A quadrangular series final Live Cricket Score: India A win by 4 wickets 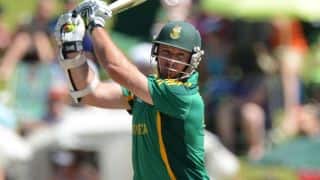