The live cricket streaming of Jharkhand vs Bengal, Vijay Hazare Trophy 2016-17 will be available on Hotstar.

Two of the giant sides in Indian domestic cricket, MS Dhoni‘s Jharkhand and Manoj Tiwary‘s Bengal clash in the semi-final of the ongoing Vijay Hazare Trophy 2016-17 at the Feroz Shah Kotla Stadium in Delhi on Saturday. The live cricket streaming of the match will be available on Hotstar, while the live telecast will be available on Star Sports 2 and Star Sports HD2. The tie was originally supposed to be played on Friday. However, owing to a fire incident in the team hotel of the Jharkhand team, the match was rescheduled to Saturday. The final of the tournament will be played on Monday. Dhoni sends text to Jharkhand players saying not to worry amidst hotel fire

In a sudden turn of events, the second semi-final match between Jharkhand and Bengal has been postponed due to fire in Jharkhand s team hotel. It is believed that the kits of the players too have been damaged and as a result the match will take place on Saturday. Jharkhand skipper MS Dhoni has been rescued from the fire, however the status of the rest of the team is still unknown. The winner of this match were supposed to meet Tamil Nadu in the final, scheduled to be played on Sunday at the Feroz Shah Kotla Stadium, Delhi. 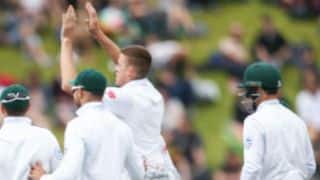