Indian women's team pace spearhead Jhulan Goswami will be felicitated with awards to the tune of Rs 10 lakh at the CAB Annual Awards function on August 8.

Kolkata: Indian women‘s team pace spearhead Jhulan Goswami will be felicitated with awards to the tune of Rs 10 lakh at the Cricket Association of Bengal (CAB) Annual Awards function on August 8. “The Chief Minister (Mamata Banerjee) will be coming and we will felicitate Jhulan in a big way,” CAB president Sourav Ganguly told reporters. “We are finalising the details but the cash awards will be in the tune of Rs 10,” a top CAB official, who did not wish to be quoted told PTI on Thursday. Jhulan and Co, who lost the World Cup final to England by nine runs, were today felicitated in New Delhi and the Bengal pacer will be touching base in the evening tomorrow. The CAB meanwhile named Kalyan Chowdhury, who would join Devang Gandhi, Arup Bhattacharya and Madan Ghosh as senior Bengal selectors. Ekta: Mithali, Jhulan helped me a lot to get comfortable in WWC17

Led by Mithali Raj, India Women did a splendid work in ICC Women s World Cup 2017, as they finished as the runners-up. While Mithali, Harmanpreet Kaur, Punam Raut and Deepti Sharma had their moments of brilliance throughout the tournament, team s veteran pacer Jhulan Goswami saved her best for the last, bagging a three-for at the prestigious Lord s Cricket Ground in the final against England. Talking about the experience, Jhulan admitted that it indeed was a dream come true to play in such high-intensity match at the iconic venue. Jhulan Goswami: Bowling at Lord’s in World Cup final was a dream come true

When asked to share her experience at Lord s, Jhulan said, Playing at Lord s is a dream for any cricketer. Earlier, women s cricketers were not allowed to play there. When I visited the ground for the first time, I had picked up a handful of grass from there. I was just a visitor then. I did not know if I could play here ever. Then we had one washed-out match at Lord s. But playing in the final is definitely one of the best experiences. 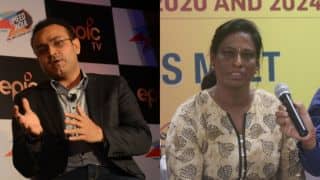