Joe Root has been in sublime form in the ongoing series and has stroked two hundreds in the five innings he has batted.

New Delhi: England batter Joe Root has been in sensational form of late. The former England skipper has been on a century-hitting spree and has stroked nine tons since 2021, leapfrogging Steve Smith, Virat Kohli and Kane Williamson in the list of Fab four.

Root has been in top form in the ongoing series against New Zealand as well and smashed hundreds in the first two Tests. It needs great skills to dismiss a batter who is going through a purple patch like Joe Root, however, not necessarily one needs to be an international cricketer to get the better of the best.

In a video that’s going viral on social media, Joe Root was clean bowled by former England captain Paul Collingwood’s daughter Keira. The video was posted by Collingwood on his Instagram stories.

In the first video, Root was bowled by Keira Collingwood by a beautiful inswinger. Collingwood captioned the post, “When you nip back through @root66 (Joe Root) gate!.”

Collingwood posted another video in which Hannah Collingwood, his second daughter, bowled an inswing delivery to Root. “Hanah trying to swing one into his front shin,” Collingwood captioned the post.

Meanwhile, the Three Lions have shown great fighting character in the ongoing three-match Test series against New Zealand. Despite being down and out on many occasions, England has bounced back in style and knocked out New Zealand with a counter punch. In the ongoing third Test, England was reeling at 55-6 at one point but a magnificent hundred by Jonny Bairstow (162) and 97 by Jamie Overton helped them claw back in the game. England eventually gained a 31-run lead over New Zealand’s first-inning total of 329. The Kiwis are 218 runs ahead in their second innings at the time of writing and the match is heading towards a cracking finish. England is 2-0 up in the series. 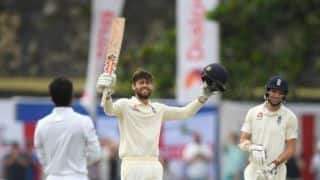 Ben Foakes Out Of Leeds Test Due To Covid-19; Billings Named As Replacement