AB de Villiers averaged over 50 in both Test and ODIs.

De Villiers averaged over 50 in both Test and one-day international matches.

He was one of the leading batsmen of his generation and became renowned for his ability to score quickly while deploying an array of both orthodox and innovative shots.

In his retirement statement, de Villiers said he felt “tired” after 14 years in the international spotlight.

The 27-year-old Root is now among the world’s leading batsmen but there are concerns that the burden of captaining England in Tests allied to his desire to play ODIs and Twenty20 internationals mean the Yorkshireman is running the risk of burn-out.

But Root, speaking at Lord’s ahead of the first Test against Pakistan on Thursday, said: “I think it is very different. If you look at someone like AB, he has had a wonderful career, done freakish things in the game across three formats and he has been a great servant to South Africa.

“But he has been doing it for 12, 14 years, a long time, and by anyone’s standards that is a long career.

“I look at how it is at the minute and when you go from different formats, it give you energy. A slightly different squad, a different way of thinking about the game and that has always been enough for me to be energised.

“I can’t see how that is going to change any time soon for me,” added Root, who made his England debut in December 2012. 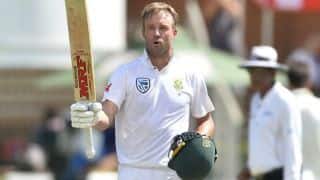