Archer missed England's first Test defeat against Australia at Edgbaston after struggling to completely recover from injury in time for the opening of the Ashes series.

Jofra Archer boosted his bid to prove his fitness for the second Ashes Test against Australia as the England pace bowler took six wickets and scored a century in Sussex‘s Second XI’s clash with Gloucestershire on Tuesday.

Archer missed England’s first Test defeat against Australia at Edgbaston after struggling to completely recover from injury in time for the opening of the Ashes series.

The 24-year-old was England’s leading wicket-taker with 20 during their historic first World Cup triumph in July, but he required painkillers to deal with a side strain in the tournament.

A productive morning for @JofraArcher

Jof’s figures of 6-27 from 12.1 overs has seen Gloucestershire dismissed for 79! pic.twitter.com/t9OAYfWTUL

With James Anderson sidelined by a calf injury, Barbados-born Archer could be in line to make his Test debut at Lord’s next week as England look to bounce back from their 251-run defeat against Australia in Birmingham. ALSO READ: James Anderson out of Lord s Test, Jofra Archer set for England debut

Archer’s latest attempt to show he is fully fit came at the Blackstone Academy Ground in Sussex, four days after he played for the county’s first team in their T20 Blast victory over Kent.

He took 6-27 and bowled four maidens in his 12.1-over spell against Gloucestershire’s reserves. ALSO READ: Nasser Hussain urges bruised England to request green top at Lord s for second Test

Then, batting at number six, Archer came to the crease with Sussex 52-4, blasting 12 fours and four sixes to make 108 from just 99 balls.

Meanwhile, Jonny Bairstow has been given a vote of confidence by England coach Trevor Bayliss.

Bairstow played a vital role in England’s World Cup success, but has become a less consistent contributor in Test matches.

He was dismissed for eight and six as Australia won the Ashes opener, having bagged a pair of ducks against Ireland a week earlier.

That sequence of low scores lowered his average to 22.91 since the start of last summer, well below his career mark of 35.70.

Asked if he was concerned about the wicketkeeper-batsman’s position ahead of the second Test, Bayliss said: “I wouldn’t have thought so. He’s got a bit in the bank, Jonny.

“We know what a class player he is and he’s at his best when he’s got a point to prove. He usually finds a way to motivate himself.

“When he’s got a point to prove that’s usually when he’s at the top of his game.” 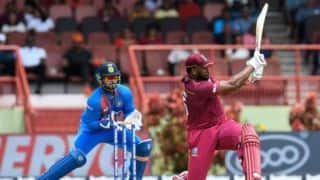