The first ever Test that New Zealand played in India was back in the 1955-56 tour. Since they have managed to win only on two occasions. The first being the  1969-70 visit inspired by Hedley Howarth‘s nine wickets, which the visitors subsequently won by 167 runs in Nagpur.  The second and the last (till date) came under the captainship of John Wright at the Wankhede Stadium in November 1988 which is remarkably also New Zealand’s most memorable victories in Asia. John Bracewell scored 52, 32 and took 6/51 and was adjudged the Man of the Match as New Zealand defeated India by 136 runs in the second Test of the series.

Talking about the same, John Wright who was the captain during the famous win, recently recalled all the happenings during that tour of India. Speaking to Times of India, Wright was quoted saying, “We had a tough first Test. We played on a wicket that turned a bit, lost the toss and fielded and a lot of us got ill on the rest day, which was Sunday. That was when two of our commentators had to field! Then we went to Goa and played another first-class game. That was the beauty of those times – we had three first-class matches and a Test going into the second Test in Bombay. We weren’t fancied, I don’t think anyone really gave us a chance after Bangalore.”

Things had not gone well for Wright as he had won the toss and opted to bat first. Talking about the same, Wright said, “That’s what you hoped to do back then — win the toss and immediately bat. We didn’t have a great start, we lost wickets early [Wright was third out with the score at 67]. I just scratched around, ticked it here and there. There was a bit of turn early on, they were bowling well. I enjoyed batting in India but never felt I had the skills that other players had against spin. I think at lunch we were in some trouble. Full Cricket Scorecard: India vs New Zealand, 1st Test at Kanpur

“Here’s a true story. When I got out in the first innings for 30-odd [33] I came back to the changing rooms, and I think I had just become one of a few New Zealanders to cross 3,000 runs in Tests. I sat down with our coach Bob Cunis, and he asked me after I’d sort of settled down, completely out of the blue: ‘How do you fancy Christmas in Rarotonga?’ And I said ‘what are you talking about? Kunis’ reply was: ‘If we lose this Test match, you and I aren’t going back to New Zealand! That’s where the name of my autobiography came from. And that is cricket in a nutshell. You’re down and out, but have that spirit.” READ:India vs New Zealand: Kiwis need the aggressor in Jimmy Neesham to strengthen batting

John Bracewell was the star turner for New Zealand as he performed with bat and ball to give the visitors an unforgettable win. Speaking about Bracewell’s all-rounder performance Wright said, “Bracewell had a fantastic match, just brilliant. That partnership down the order gave us plenty of confidence. We were just trying to put together partnerships and those two exemplified our spirit of competitiveness. You take inspiration from performances like that, more so in sticky situations. Watching from the changing room was inspirational.

“Getting runs in both innings gave him a lot of confidence, particularly in the first innings. That’s amazing, how as an allrounder that rubs off on your game. Wickets in Bombay, when they start to turn they turn quick. Bracewell had started to turn the ball and he had his tail up. That wicket suited John. He was a big turner of the ball, he delivered the ball from high up and could make it bite. What also stands out for me was the great sportsmanship on both sides. I can still remember going up in the lift in the Taj Hotel, meeting Kiran More and one of his team-mates. There must have been three or four of us Kiwis, and Kiran looked at us, smiled and said “Well played, you’ve done really well today”. That was something I have never forgotten. 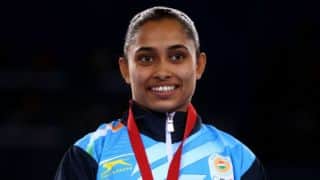