Slow left-arm spinner Jon Holland‘s maiden five-wicket haul raised his stakes to seal a spot in the playing eleven ahead of the Pakistan vs Australia Test series as Australia s four-day warm-up match against Pakistan A ended in a draw at the ICC Academy ground in Dubai on Tuesday.

Australia had declared their first innings at 494/4 after allrounder Mitchell Marsh lit up Day Three with a marathon innings of 162. Meanwhile, on Tuesday, Pakistan were helped to 261/7, ahead by 45 runs, after fifties from skipper Asad Shafiq (69) and Abid Ali (52).

Holland, who last played a Test, his second for Australia, against Sri Lanka in Colombo in 2016, claimed his first wicket of the day in opener Shan Masood (41) to break the 53-run partnership. Fast bowler Michael Neser dismissed Sami Aslam (12), while experienced off-spinner Nathan Lyon then saw the end of set batsman Abid Ali, who scored a 90-ball 50.

From thereon, Holland was responsible for all Pakistan s remaining four wickets. He dismissed skipper Asad Shafiq (69), Iftikhar Ahmed (45), Usman Salahuddin (4) and Saad Ali (5) as Pakistan slumped from 213/4 to 257/7. Holland was looking dangerous to add more to his tally with the wicket assisting spinners, but wicketkeeper-batsman Mohammad Rizwan (8) and Wahaz Riaz (2) held on for a draw. Holland returned with figures of 5/79 in 25 overs. 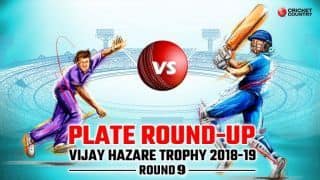