Jonny Bairstow s teammates Adil Rashid and Alex Hales have decided to give red-ball cricket a back seat to focus more on the white-ball.

Jonny Bairstow wants to play as much of Tests as possible because cricketers are remembered for their Test numbers. The growth of T20s has seen the short format drive the revenues and Test cricket is in danger of survival. There was little attendance during the first day of Australia-South Africa first Test. Also Bairstow s teammates Adil Rashid and Alex Hales have decided to give red-ball cricket a back seat to focus more on the white-ball.

It’s the traditional game, it s like taking fifteens rugby away and just playing sevens rugby. It s something we ve definitely got to cherish and play and I want to go on and play as many Tests as I can because you get remembered for how many Tests you’ve played.

Test cricket is huge, and if we’re not careful then there are going to be more and more people that do it [give up the red ball], because you’ve got lucrative tournaments around the world that people now can go off and earn a heck of a lot of money for five weeks work when the strain and stress [is less] on the body of bowling fours overs comparatively to bowling 24 overs in a day in Test cricket. So whatever way it is we can preserve Test cricket and go forward with that is really important, Bairstow was quoted in a report in Cricbuzz.

Earlier, teammate James Anderson was quoted as saying, I just pray there is enough love for Test cricket out there. With the way cricket is going and the amount of Twenty20 cricket around the world, there is that worry that more and more people will start doing it.

ICC are doing their bit to preserve Tests by opening up options like day-night Tests and four-day Tests. Cricket boards need to open up to this option. For example, despite the poor attendance in Tests in cricket-crazy India, the board hasn t staged a day-night Test yet.

However, more path breaking innovations are required to let the purest format sustain. 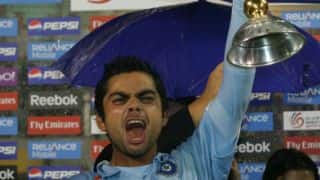