Bairstow, who struck 141 not out as England eased to victory with 12 overs to spare against a poor West Indies.

Jonny Bairstow is confident that England have the batsmen to compete in the Ashes but admits they need to learn quickly as they plan for Australia not even knowing if star-all-rounder Ben Stokes will be on the plane. England thumped West Indies by 9 wickets on Friday to seal a 4-0 win in the ODI series and end a long and successful season on a high note. ALSO READ: Bairstow’s 2nd ODI hundred helps ENG to 9-wicket win; hosts seal series 4-0

But the day-night match in Southampton was overshadowed by the Stokes scandal, with the player arrested earlier this week on suspicion of causing actual bodily harm and suspended from internationals until further notice. England can ill afford to be without the big-hitting Durham all-rounder, particularly with question marks over a number of positions in the top-order despite Test series wins against South Africa (3-1) and West Indies (2-1).

Joe Root s men are Ashes holders but they have lost two out of their past three tours Down Under 5-0 and are desperate to hit the ground running in Brisbane on November 23.

Friday s man-of-the-match Bairstow, who struck 141 not out as England eased to victory with 12 overs to spare against a poor West Indies, said he would go into the winter full of confidence after scoring two hundreds during the ODI series.

I m pretty pleased, he said. It s nice to finish a long summer with some runs and head into the winter with confidence. You wait a long time for a first hundred and when it comes you want to capitalise. If selection doesn’t go your way, you have to bide your time and take the chance when it comes, added England’s Test wicketkeeper, who appears to have finally secured a regular role in the one-day side.

England s next international fixture will be the first Test in Brisbane and Bairstow is confident their batting is good enough, when asked if the batsmen measure up to their one-day counterparts.

If you actually look at it there s 50 First-Class hundreds at six, seven, eight and nine so I don t know if you’re classing that as weak, he said.

Do please let me know another side in the world that s got 50 First-Class hundreds in those three or four batting positions. That s been a strength of ours over a period of time and will continue to be. We re very fortunate to have all-rounders in those positions, whether that be in one-day cricket, T20 cricket or Test cricket.”

There were Ashes recalls for middle-order batsmen James Vince and Gary Ballance despite the pair’s struggles during their previous Test stints but Bairstow said a settled line-up cannot be achieved overnight.

It takes a period of time for people to bed into an environment, to bed into a team, to bed into a role and learn a role, he said, stressing the difficulty of stepping up from county to international cricket.

We do need to learn quickly because we ve got a huge series on the horizon, he added. It s something that is going to be tough but at the same time we re ready for the challenges that are ahead.

One-day skipper Eoin Morgan said he was delighted with England’s performance against the backdrop of Stokes’s arrest, saying the one-day team was benefiting from great strength in depth.

We re spoiled for choice with the batsman that we have on offer, guys missing out, so certainly it raises the standard in the changing room, he said.

But neither player would not be drawn further on the Stokes situation.

England said the all-rounder would not be considered for selection until further notice following the emergence of a video apparently showing him fighting outside a nightclub in the southwestern city of Bristol.

Test vice-captain Stokes was included in the Ashes squad announced Wednesday, despite reportedly injuring his hand in the incident that led to his arrest.

The all-rounder was released without charge but remains under investigation. 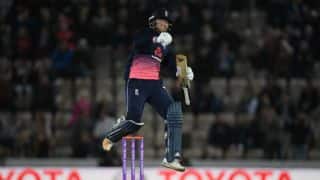 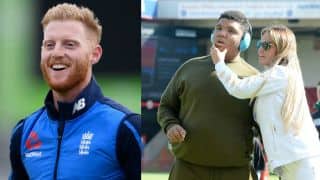