Jonty Rhodes seems to be enjoying life after cricket to the fullest, as he was spotted enjoying Covelong surfing, music and yoga festival in Mahabalipuram.

Former South African cricketer and fielding legend Jonty Rhodes seems to be enjoying life after cricket, as he was spotted enjoying surfing at Covelong, just 20 kms from Mahabalipuram in Chennai. It was not just limited to the seas and the waves, as he has also shrugged off his fear of heights to try out bungee jumping in the Bloukrans in South Africa; he hailed it as a remarkable experience. Travelling in India has always been on Rhodes’s wish list, as ranging from Royal Enfield rides on Mumbai roads to Lonavala has inspired Rhodes. AB de Villiers wanted to retire from Tests much earlier, says Jonty Rhodes

Speaking more about his encounter, Rhodes told The Hindu, I find it relaxing and challenging. He also spoke about his bungee jumping experience in South Africa. It was scary at first, but turned out to be an incredible experience.

On his Indian road trip experience, Rhodes said, If I am in Mumbai, I try to take a Royal Enfield and go out on the roads. I have also been picked up by the Jaipur Riders and been taken out. In South Africa, it s all very fast. In India, sometimes the roads are congested and it s fun. Comparing Virat Kohli to Sachin Tendulkar is unfair, says Jonty Rhodes

Rhodes also said travelling in a train was next on his list.

I have seen both the good and the bad here. But India is a spectacular country. In Mumbai, I try and go to Lonavla. But Jaipur is special, he added.

There are a lot of similarities between cricket and sailing. When you are batting, every ball is different. It s the same in surfing. No two waves are ever the same. Matthew Hayden has grown up surfing in Australia. Dale Steyn is a keen surfer, I see him surfing from time to time in Cape Town. Jonty Rhodes blessed with second child in India; son born in Mumbai hospital on IPL 2017 final day

Rhodes also shared how guns scare him. The year was 1996 and we travelled to Pakistan for a tri-series. We also journeyed to the rugged Khyber Pass. There were guys who fired their AK-47s in the air for fun. I was scared of the guns though! he narrated. 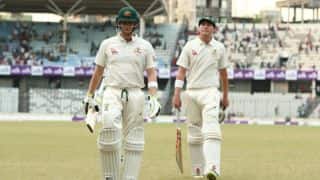